Wow, just doing some updates to the blog and discovered that I really need to get to Samos and Patmos … this way I can complete my list of visits to the UNESCO World Heritage sites in Greece (it doesn’t count if I’ve been to some of them many times), it looks like the eastern Aegean will be on our travel to do list for 2010.

Acropolis isn't the only World Heritage Site around Athens

So here’s a list of the sites in Greece

Once you’ve visited the Acropolis and the Parthenon in Athens, you can actually day trip to several others from your base in the city center:
* Acropolis, Athens
* Archaeological Sites of Mycenae and Tiryns
* Sanctuary of Asklepios at Epidaurus
* Archaeological Site of Delphi
* Monasteries of Daphni, Hosios Loukas and Nea Moni of Chios

Further afield, you’ve got to get yourself thinking there is more to Greece than Santorini!

* Temple of Apollo Epicurius at Bassae
* Medieval City of Rhodes
* Meteora
* Mount Athos (I’ve checked this one off the list, since technically I made it there. They just don’t let people of my gender in.) 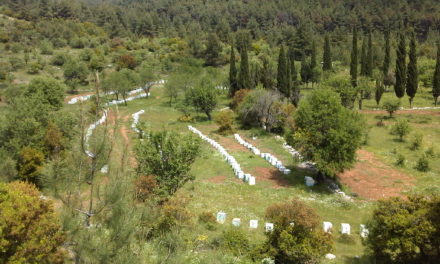 Golden amber where the road ends

Beyond Athens: Amphiareion of Oropos