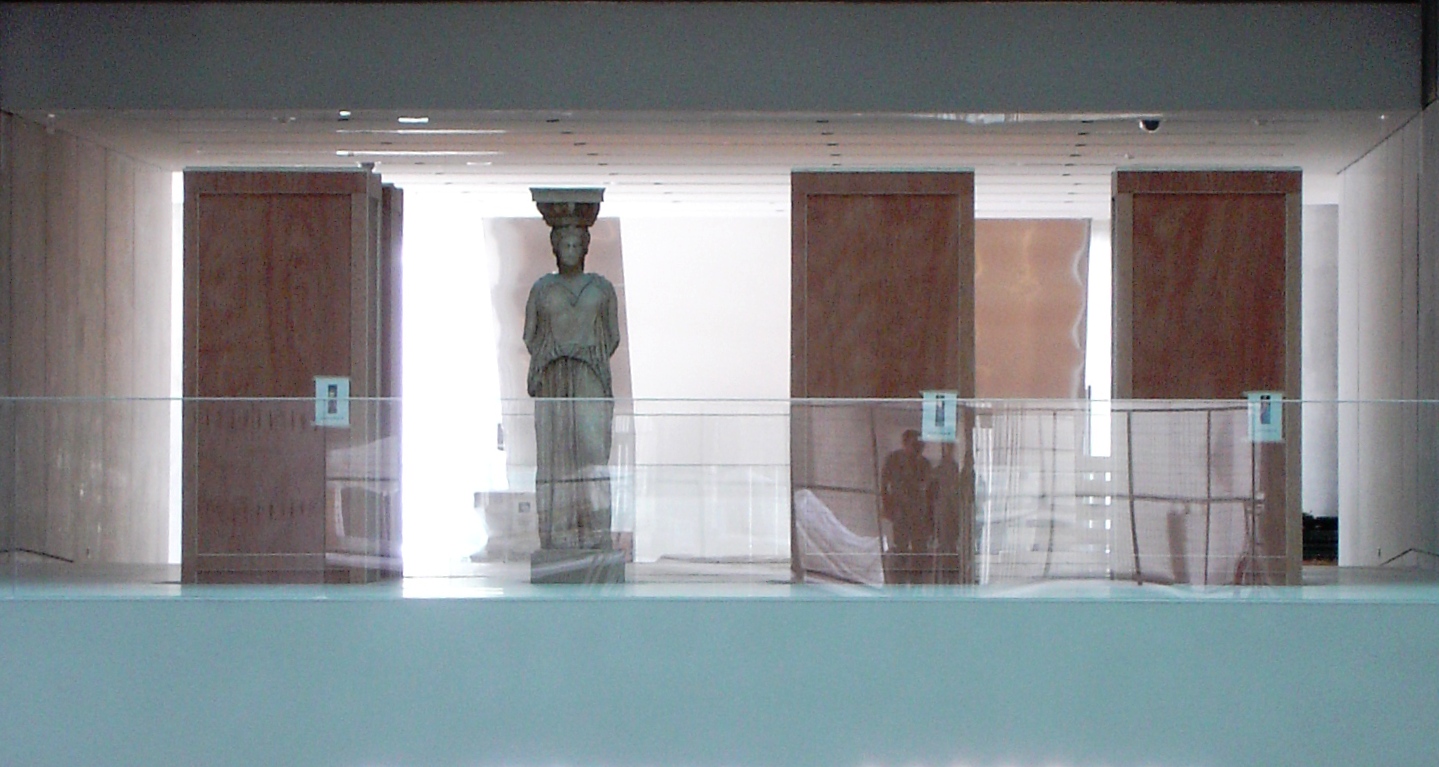 Visitors to Athens cannot help but notice the large cranes perched next to the Acropolis, and you’ll be hard pressed for the next several months to capture a photo of the Acropolis without the crane somewhere in your photograph.  Fret not about this, instead consider that you are in Athens for a historical moment in the city’s history, as the artifacts from the small museum that sat for years (rather sadly, sort of as an afterthought) in one corner of the Acropolis, are gingerly moved down from their perch to find a new home in the city’s latest crown: the New Acropolis Museum.

Located in the shadow of the Parthenon, just off of the beautiful pedestrian zone that begins near Vasilias Olgas and winds its way past the peaceful downtown neighborhood of Makrigianni, the museum opened its first exhibit a few months ago, and on a sunny February afternoon we paid it a visit. (Well, actually, we didn’t pay, entrance is currently free. Only the main floor is open, and only for limited hours – 10 AM until noon). 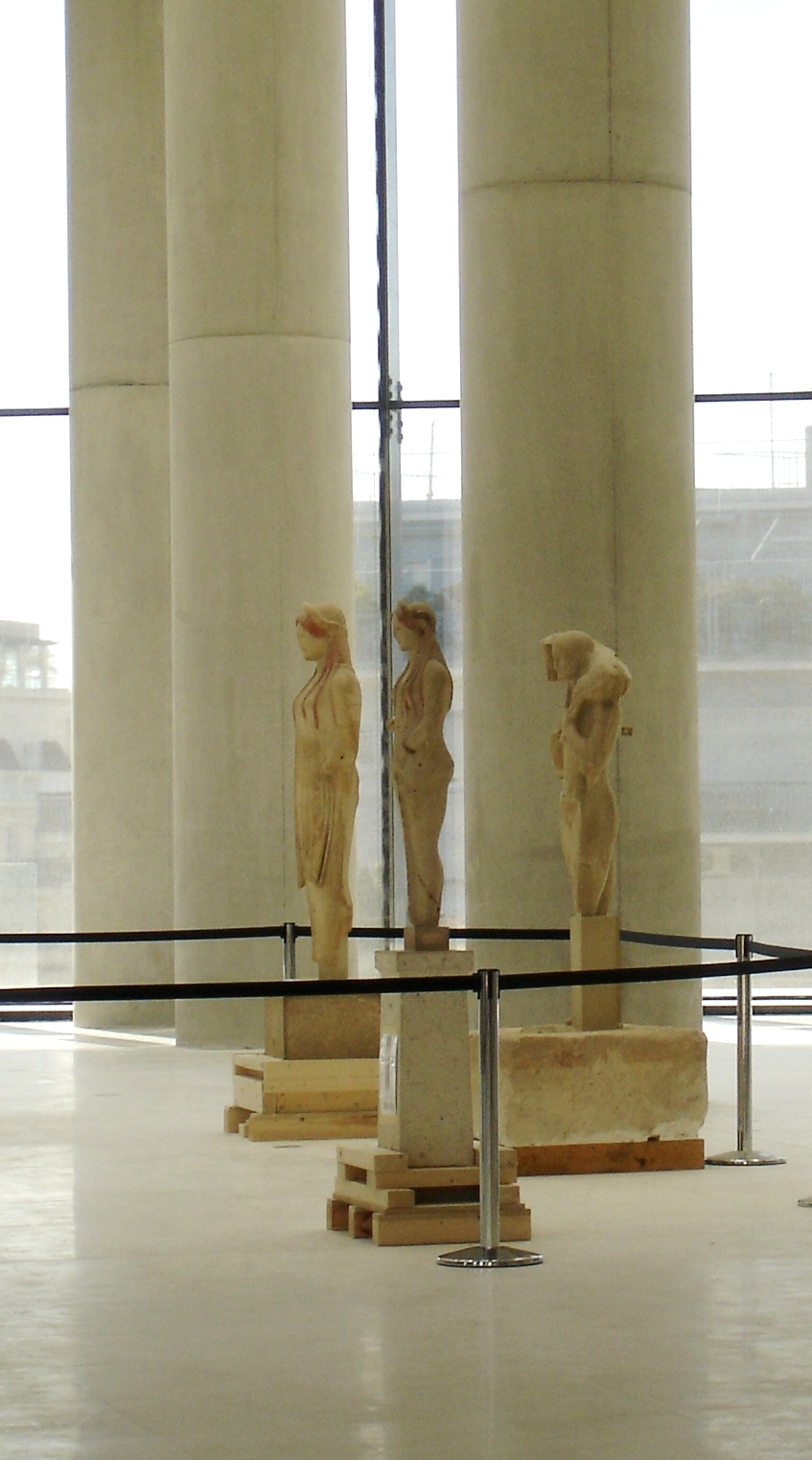 The building is architecturally interesting for Athens. Lots of glass. Walking up the path between the traditionally built building that houses the Archeological Ministry  the reflections provide a simultaneous image of ancient, old and new, as the reflections change as you get closer to the museum’s main entrance.  Along the path glass panels in the sidewalk offer another glimpse at history, as do the columns upon which the entire museum is built. The excavations below the museum have been left intact and the museum sits perched above so that passersby can view the remains of the city that goes back to the Fifth Century BCE and which flourished until the Twelfth century AD.  Streets were found intact with water-supply lines and sewer systems, houses, shops and  villas with elaborate mosaic floors (some are displayed in the museum).

Inside the museum the small exhibit chronicles the history of the museum’s coming to be, along with a terrific series of 12 displays in Greek and in English designed to help children understand a bit about the excavation process as well as the city which was unearthed during the process of constructing the museum.  Children visiting the museum also receive a book about the findings unearthed during the excavation, although unfortunately is currently only available in Greek. We were told that they hope to have it available in English (as well as other languages) soon.

After the exhibit there is a large hallway leading to some stairs which offer a glimpse into some of the museums galleries. On one side a few lone statues stand, on the other side, beneath the floor to ceiling windows that glimpse the Parthenon, a group of artifacts sat waiting to be uncovered, for a second time. 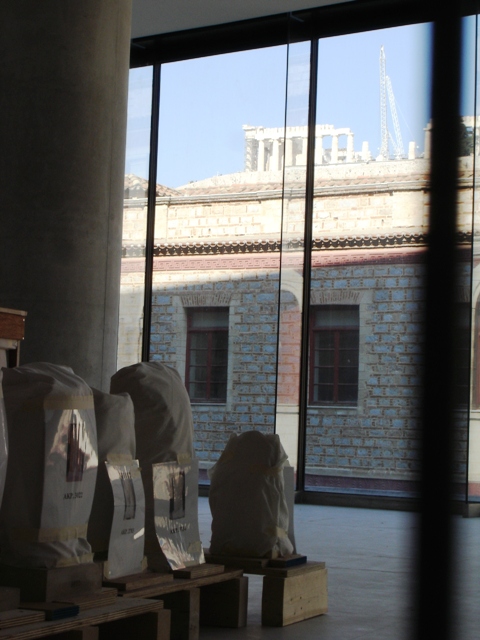 Descending the stairs, you’ll notice a lone statue standing between three wooden crates on the mezzanine gallery. There stands the one lone Karyatis, who once held the roof of the Erechtheion atop the Acropolis with her 3 sisters. Today, her sisters reside in England, but it is her hope, as it is the hope of the Greek people and Grecophiles around the world, that soon they will be returned to their homeland. A special gallery has been built for them, and until then, she will wait with the empty crates. 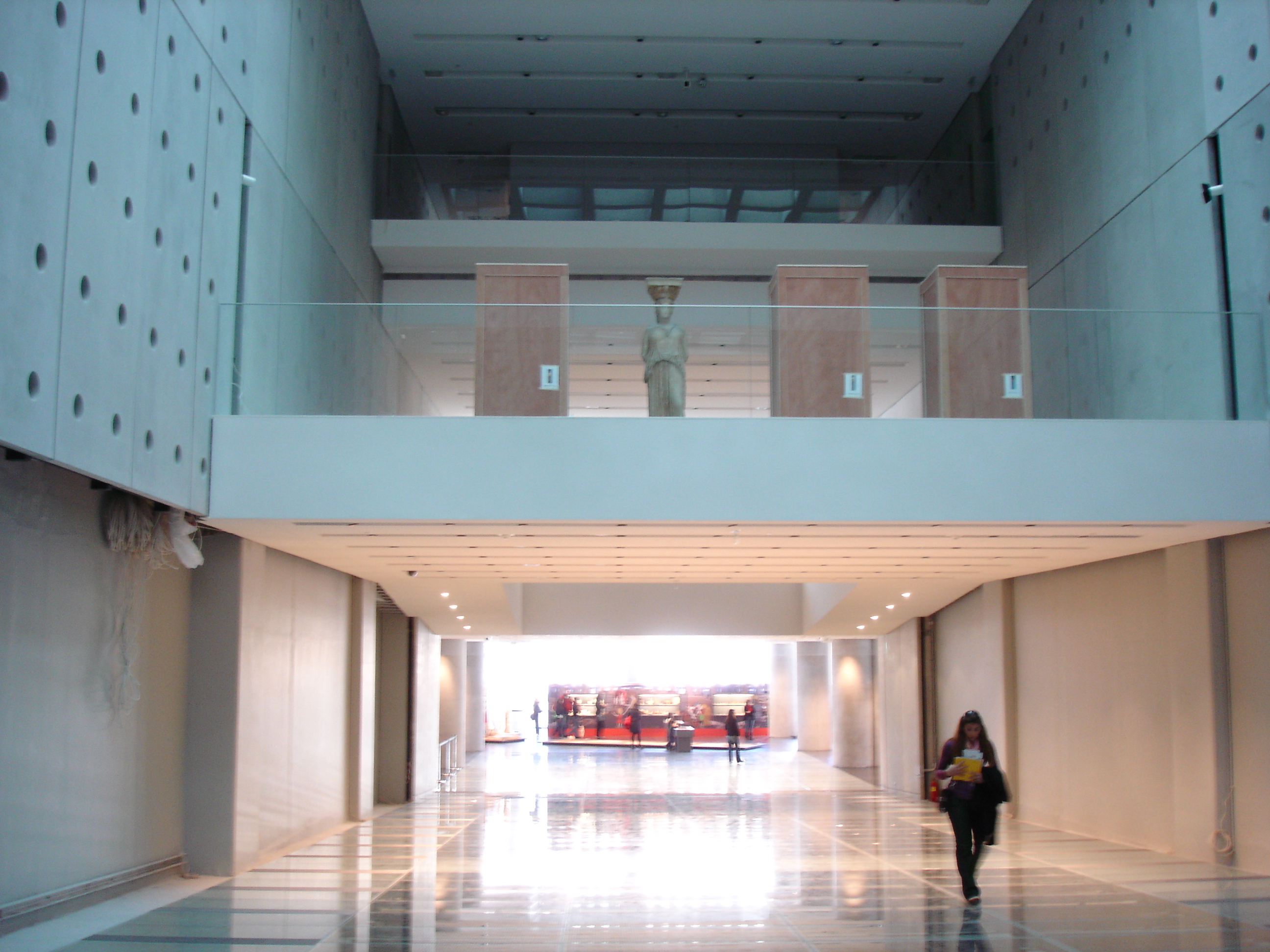 The museum is located at Markigianni St. 2 – 4, on the south side of the Acropolis.  There is a metro stop out front, appropriately named Acropolis, but it is really not a far walk from Syntagma Square and the neighborhood surrounding the museum is a beautiful, quiet residential area that is worth spending some time exploring.

Update as of September 2008 – the children’s exhibit was closed when we visited last week, in it’s places is a video presentation showing the moving of the museum pieces from atop the Acropolis to the New Acropolis Museum below.

3 thoughts on “The New Acropolis Museum – The Museum and the Excavation, a special exhibit”