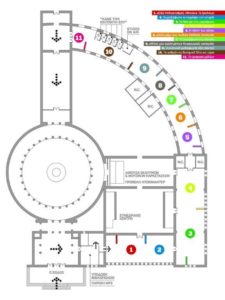 The National Radio and Television group is celebrating 70 years of broadcasting in Greece with a exhibition along with a series of live concerts at the Zappeion.

The exhibition runs from December 8, 2008 until January 30, 2009, with a series of live performances (which will be recorded and broadcast on Greek radio and/or television).

If you have never been inside the Zappeion Exhibition Hall, this is an excellent opportunity to visit the stunning rotunda, while learning something about the history of broadcast communications in Greece.

In addition to the concerts and the historical collection on display, visitors are invited to tape their own broadcast and submit it to a competition which will culminate in the winning submissions being broadcast on Greek radio and television (ERT). I’m pretty certain that this is open only to Greek speaking visitors, but Athens could sure use another couple of English stations, so if anyone is so motivated, I say, give it a shot and submit one in English! The expats in our midst will thank you.

Tickets for the concerts are available by calling ERT, 210-60-66-815 or emailing aandrikakis@ert.gr, but there is also an entry form for two of the concerts, Giannis Haroulis and Yiorgos Dalaras here.

Concerts are listed on our Event Calendar by date, but here is a summary, along with some links to the various performers.