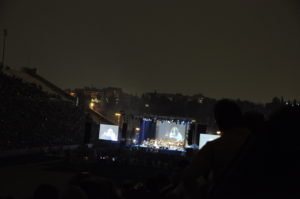 Visiting Athens this summer? Sure, everyone wants to see a concert at the Herodion or the Odeon, that marvel of an ancient theater under the Acropolis built by Herod Atticus in 160 AD in memory of his late wife. But summer in the city isn’t limited to this as the only venue for music under the stars.

Athens boasts a number of outdoor concert venues several of which are either downtown or really, really close to the center: Lykavittos Theater and Theatro Vrachon (also Melina Mercouri Theater) are the closest and best choices if you are staying downtown – but don’t be afraid to venture out to the parks, the Stadiums (Karaiskaki and OAKA) or to the International Petra Festival in the nearby suburb of Petropoulis.

Check the event calendar for your Athens dates – you’re bound to find something playing somewhere in the city that’ll give you a taste of Greece …. the experience of a popular laiko singer or rembetiko musician sharing the microphone with young newcomers as the audiences shamelessly sings along. For me there is still nothing more beautiful than to be surrounded by the audience, particularly when it spans the generations, as everyone sings in unison. You won’t know the words, but you will most certainly grasp the feeling.