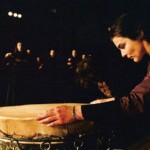 “Choefores” by Aeschylus, was first played in 1992 at the Epidaurus Festival, in Cyprus and all over Greece. It was a big hit and was considered one of the most interesting plays in Ancient Greek Tragedy. This year the same tragedy will be played, translated, directed and choreographed by Kostas Tsianos, while the outstanding Lydia Koniordou will play the parts of Electra and Klutaimnistra. The part of Orestis will be played by Nikos Psarras.

Eleven years later, Kostas Tsianos returns to the Thessalian Theatre, being one of its founders and having served it for twenty two years, fifteen of which as artistic director. A similar comeback is that of Lydia Koniordou who by participating in Ancient Tragedy performances of the “Thessaliko” gained recognition as one our most important tragedians.