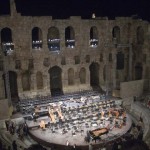 It’s early August, my favorite time of the year as I anticipate my return to Athens, but more important, the announcement of the schedule of concerts and other performances at my favorite outdoor concert venues in and around Athens.
This year I am a bit early with my post, since thanks to some advance planning, the Greeks have actually announced the scheduled concerts already! The beautiful part of having the schedule so far in advance is that you still have time to catch a deal on plane fare from the US (or wherever you call home) to Athens for one of the many terrific lineups …. And the bonus? Unlike an American concert, where you get the opening act and the headliner – Greek concerts are often a large reunion of the biggest names in the music industry. Not one or two performers, but six or sixteen! Trust me when I promise you that you will not ever be disappointed attending a live, outdoor Greek concert.

** Update 8/21/09** Several announced concerts have apparently either not been confirmed or tickets have not gone on sale yet. Concerts with links to ticket sales are confirmed, those without, are not. I recommend subscribing to post updates as I will be updating this list as new information becomes available. (Like I have said many times … Greece is not a place about ‘advance planning’, so pour yourself an ouzo and relax, missing information will be forthcoming.)

September Concerts at the Herodion

October Concerts at the Herodion