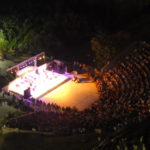 The city of Athens and the Athenian Festival host a variety of performances throughout the city of Athens each summer. The Attiko Alsos (the Little Forest of Attica, or the Attica Woods) is a terrific outdoor performance venue located in the city of Athens, and, not only is this festival in the Attica Woods an incredible chance to see some of Greece’s finest performers under the stars, it’s also friendly to your wallet. Many of the concerts and performances are free, and those that are not have ticket prices at 20 euro or less.
The Festival begins each summer in July and runs through September.
Performance times
September performances all begin at 20:30 (8:30 pm)
Ticket Information
• Cultural Center of the City of Athens (50 Akadamias) Monday through Friday 10:00 to 16:00 (10: 00 am – 4:00 pm) (telephone 210 3612920)
• “Technolopolis” (100 Perios Street) Monday through Sunday 10:00-10:00 (10: 00 am – 22:00 pm) (telephone. 210 3475518)
• Attiko Alsos Theater, Monday through Sunday 19:00-21:00 (7:00 pm – 8:30 pm)
Concerts and performances with free admission are general admission, with no assigned seating, and a ticket must be picked up from the theater box office on the day of the performance or from the Cultural Center presale points Monday through Friday prior to the day of the performance.
Information about the program and tickets available by calling the Cultural Center of Athens at +30-210-3621601 – 210 3630706, the City Line at 1595 and by email.

How to Reach Attiko Alsos Theater
OASA, the bus company, has set up a bus specifically for the Attiko Alsos Theater. In September the bus leaves from Platia Kaniggos at 19:30 (7:30) and returns from the Attiko Alsos park at 23:00 (11:00 pm).
Entrance to the theater is from Karpenisioti street at Galatsiou (Tourkovounia). Access to the theater from the Kifisias – Katchaki interchange via Mouson Street (in front of LHTO) and from Patision street via Galatsiou Boulevard, Protopapadakis.