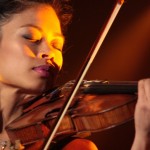 Imagine talent that can go from this ….

Pop performer, classical violinist, and self described self-described as “violin techno-acoustic fusion” musician, beautiful Vanessa Mae has come to Athens several times and her concerts are always sold out. Five years after her last performance in Greece, she returns with an amazing line-up featuring all her material. The violin queen will be appearing at the Odeon of Herodes Atticus – Herodion on September 24, 2009 . But this time, she will be accompanied by a six-piece band, an orchestra and a huge team of technicians to present a unique show never before seen in Athens.

It promises to be an unforgettable evening, during which Vanessa Mae will journey through Bach, Beethoven, Brahms and Vivaldi, as well as well tango, Indian music, pop songs, numbers by Greece’s own Vangelis and many other well-known ballads. She will breathe life into it all with her electric violin and original orchestrations.

It is no coincidence that Vanessa Mae has sold more than 10 million albums throughout the world, has won 40 International Platinum Awards and her sheet music has circulated in more than 8 million copies as over the last 15 years, she has managed to achieve a balance between a classical and pop repertoire.

Mei has collaborated with popular pop artists, including Janet Jackson and Prince, while on her recent albums she has added her voice to the violin. Enjoy Vanessa Mae in Athens on 24 September at the Odeon of Herodes Atticus – Herodion.