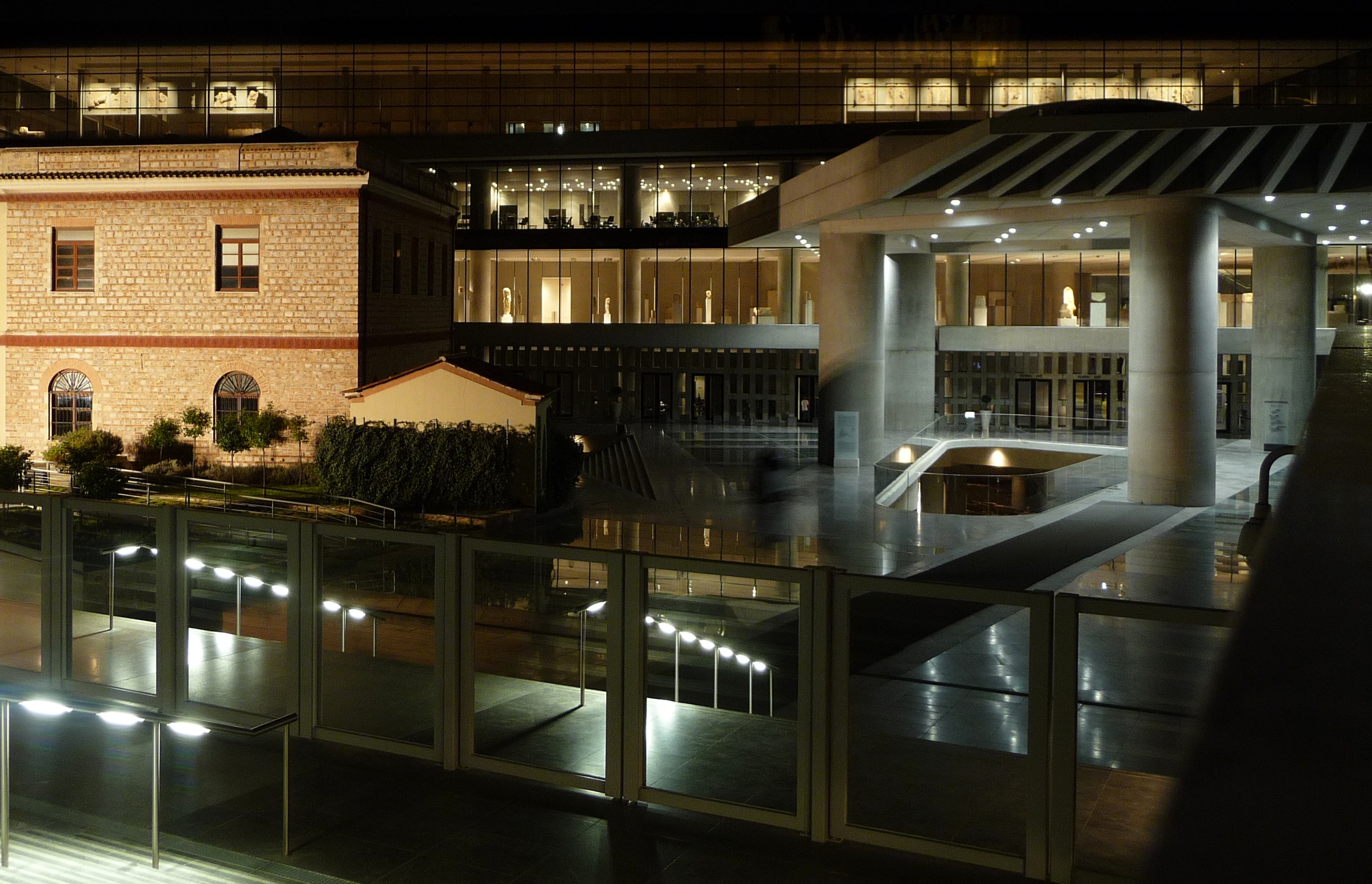 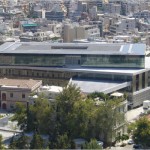 Located in the shadow of the Parthenon, just off of the beautiful pedestrian zone that begins near Vasilias Olgas and winds its way past the peaceful downtown neighborhood of Makrigianni, the New Acropolis Museum in Athens, Greece official opened in June 2009. Although we’d visited the museum several times since the building first opened, we were, at that time, limited to the main floor lobby and a sneak peak at one of the upstairs galleries. Now, 2 months after the official opening of the Acropolis Museum, we returned to tour the upstairs galleries and the café of the Museum. (Most people don’t realize, although the Acropolis Museum opened to much fanfare on June 24, 2009, the entire Museum is not yet actually open. The excavations below the Museum are scheduled to be open some time in 2010.)

The building is architecturally interesting for Athens. Some people love it, others hate it. In the architectural community it has received loads of praise, and I personally love how it reflects a Zenish, modern image of the Parthenon. There’s lots of glass, giving the Museum a minimalist feeling. When I first visited, the entrance was from the side, and walking up the path between the traditionally built building that houses the Archeological Ministry the reflections provide a simultaneous image of ancient, old and new, as the reflections change as you get closer to the museum’s main entrance. Along the path glass panels in the sidewalk offer another glimpse at history, as do the columns upon which the entire museum is built. The excavations below the museum have been left intact and the museum sits perched above so that passersby can view the remains of the city that goes back to the Fifth Century BCE and which flourished until the Twelfth century AD. Streets were found intact with water-supply lines and sewer systems, houses, shops and villas with elaborate mosaic floors (some are displayed in the museum).
The “real” entrance to the Museum is off of the Dionysiou Areopagitou Street pedestrian zone, via a wide staircase which descends onto an open, covered plaza, filled with glass plates allowing the visitor to view the excavations below. In the center an open air section offers a better view of the ruins below.

It was noon when we walked toward the museum entrance, only to discover a long line waiting to go through security. To the left ropes separated the main security entrance from another entrance, where the sign instructed those who had prepurchased tickets on the Internet to move ahead and avoid the line. We had not purchased ours online, so we decided to take a walk around back, through the side garden on the Museum. There we relaxed among the ancient olive trees that had been planted recently, and after about 20 minutes we returned to the entrance, where the line was completely gone. (I share this bit as it seems between 11:30 – 12:30 the lines are longest, at least in the summertime when tour groups all seem to land at this spot at once, and hot tourists finished with their Acropolis visit come down to cool off and tour the Museum. Of course, I’ll be checking out the online purchase of tickets to see if it really offers me VIP entrance – I’ll keep you posted on that one). 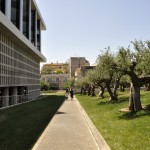 As we passed through security, we were informed that we could not take any pictures inside the Museum, other than from the Café and the terrace outside of the Café. We purchased our 1 euro tickets at the ticket counter, from there we were directed to the Coat Check (free) where we deposited our backpacks for safekeeping.
From here we headed to the turn-styles, and, just like a Chicago Transit Authority “el” station, we slipped our tickets into the ticket reader, and headed through the turn-styles to explore the Museum galleries.
A long airy hallway, which last February had contained cardboard cutouts hinting at the artifacts it would soon house, was now full with the real deal. This is the “gallery of the slopes”, and the articles on display where found on the slopes of the Acropolis. In ancient times, this area leading to the Acropolis was the “transition zone” between the city and the sanctuary above. In today’s Acropolis Museum, glass panels offer peaks at more excavations below, and the raised floor reminds the visitor they are ascending toward the Acropolis.
This first gallery mimics the ascent to the Acropolis, and on display are the finds from this particular area of the Acropolis. In ancient times this path would have been lined first with homes, workshops and other signs of everyday dating back as far as 3000 BCE (the Neolithic period) and continuing until about the 6th century AD). Many of the objects on display here were part of the “preview” exhibition that told the story of the excavations which we saw on our earlier visit to the Acropolis Museum.
The slopes leading to the Acropolis were also the location of choice for worshiping the Gods, and Sanctuaries were built for numerous deities and heroes. A healing center was founded on the south slope, complete with a statue of the god from a temple at Epidaurus. Nearby another sanctuary stood a small open air temple dedicated to the goddess and protector of marriage and weddings, Nymphe. Numerous beautiful vases and votive offerings are on display from this area.
Also on display in this area are artifacts from 3 caves on the northwest slope which were home to the cults of Zeus, Apollo and Pan. It was in one of these caves, according to ancient myth, where the Greek god Apollo met in the3 biblical sense with King Erechthus’ daughter, Kreoussa. The child born of this union, their son Ion, is, according to mythology, the father to all Athenians.
At the end of the “slope gallery”, a set of stairs leads up a set of stairs, mimicking the Proylaia of the actual Acropolis.
From here we passed through the Erectheion, where the history of Athenian myth and its Goddess Athena unfolds in a series of sculptures and other artifacts. It was interesting for us to note how logically the museum is laid out, and I’m thinking that for the lay person, particularly for children, the museum is going become a major source of historical understanding, by giving us a bit of history, bite by bite, step by step. (Unlike so many museums where a visitor can become overwhelmed with antiquities, leaving with little comprehension or retention of what they have seen and learned.)
Beyond the Erectheion we enter the Archaic Gallery. A series of sculptures from a pediment of the first Parthenon, dating back to roughly 570 BC, are displayed in a replica of the original shape of the temple from which they originally came.
The Archaic Gallery
As we entered this gallery I really started to understand the architects intentions for creating a space that mimics the adjacent antiquities, without detracting from them. In this gallery (and those we’ll see on high floors) a series of large, simple concrete columns comprise the structural interior of the building. They also mimic the structure of the Parthenon, and much like they would have been in antiquity, the statues and artifacts are displayed haphazardly throughout the tall, open space. It was here that I understood why they were prohibiting cameras. The museum was so crowded with visitors, I could not imagine what would have been happening there if everyone had cameras … each of us backing further away from the object of our attention trying to get the entire scuplture in our shot. Perhaps we’re aiming for the beautiful Peplophoros Kore or the Spinx eyed Korre, and instead, we collide with one another, or worse yet, with one of these beautiful sculptures. The camera ban, in my opinion, is a good one for now. Perhaps they will readdress this as traffic at the Museum slows down, but for now it is best to respect this, as it is definitely a logical decision.
The second level of the Acropolis Museum houses the Museum Café and Terrace. Since by this time the crowds who had been in line to get into the Museum when we first arrived were enjoying lunch and the views, we decided to continue upstairs to the Parthenon Gallery. After lunch I managed to catch a few shots from below the Parthenon gallery. Be forewarned, this museum has a lot of glass floors. The dress code definitely calls for short or long pants and NOT mini skirts (this is a G rated blog so I’ve left out those photos).

In all honestly, because I couldn’t take photos inside the galleries, this part of the Acropolis Museum is a bit of a blur in my mind (as are the photos I tried to sneak from the Media Room located above the galleries. I intend to revisit soon, with a notepad this time, to better understand and remember the space. Since each floor is physically similar, remembering where one artifact was over another will take time and a number of return visits. The bathrooms, though, are always in the central core, a nice touch by the architect, so that you are never far from one. What I do remember from the Parthenon Gallery is the simplicity of the pediment displays, mounted between large concrete columns, running around the perimeter of the “temple”. Here recreations show, along with pen and ink drawings from various artists at various times, what one would have found on this site in antiquity. There were 92 of these metopes and each displays a scene from life in Ancient Greece. Each scene is independent of the next, and many contained scenes depicted triumph or strife in battle. The west side shows the Athenians fighting the Amazonians; while the West side dipects the sacking of Troy. The east side shows the battle of the Gods against the Giants while the south shows scenes of Thasslians fighting the Centaurs as they tried to steal away with the former’s wides during a wedding. 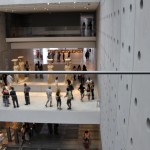 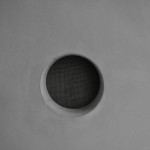 It is an amazingly quiet museum, too, which seems to entice this exact type of contemplation. The quietness of the immense space is due to the acoustic holes which line the walls of the interior.
Until then, seating is on the 2nd level, in the Museum’s Café and Terrace. The Cafe, by the way, ranks amongst the best bargains for lunch in central Athens. A truly tasty lunch, lovely presentation and even lovelier price.
The museum is located at Makrigianni St. 2 – 4, on the south side of the Acropolis. Admission until December 31, 2009 is 1 euro, and tickets may be ordered online from the Museum’s website or purchased at the Museum when you arrive. There is a metro stop out front, appropriately named Acropolis, but it is really not a far walk from Syntagma Square and the Makrigianni neighborhood surrounding the museum is a beautiful, quiet residential area that is worth spending some time exploring. 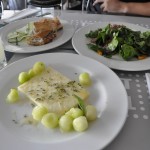 How to purchase tickets:
Tickets are available from the Museum Ticket Desk
Tickets purchased online
The Museum website provides an e-ticketing service for a restricted number of visitors during six (6) specific time slots. Tickets bought via e-ticketing may be picked up at the Ticket Desk or from the Self-Service Ticketing Kiosks at the Museum entrance.

1 thought on “A visit to the New Acropolis Museum”