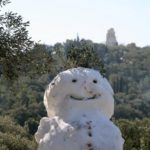 I get this question a lot, “when is the best time to visit Athens” and “what’s the weather like in the December in Athens”? I also hear, “isn’t it unbearingly hot in Athens in July and August?” To answer these questions and debunk the myth about weather in Athens, I thought I’d includes an average monthly temperature chart from weather.com which shorts Athens to actually be a great place to visit to visit twelve months of the year. Much like San Francisco, California, Athens rarely gets below freezing. Every few years there is a snow storm, but the snow never lasts more than a day, since the warm sun melts it all pretty quickly and compared to a New York or Chicago winter, the days are downright balmy even those rare times there is snow on the ground. For photos of our last freak February 2008 snowstorm, visit our Photo Gallery.

In general my favorite months of the year are February to May and September to November. That isn’t to say Athens isn’t to say that June through August aren’t great times to visit Athens, they are. In fact, it is when most tourists visit the city of Athens, which leads to my aversion to recommending these as the best time to visit Athens. I want to see the Acropolis, not a mass of tourists, so I avoid the popular sites in the summertime for this reason, not for weather reasons. I do actually stay inside of Athens during the summer, enjoying the parks, outdoor music festivals and lots of off the beaten path sites that aren’t on the typical tourism radar. And of course, shopping in August is terrific in Athens. It’s one of the “sale seasons” and a great time to find bargains on non-souveniers like clothes, jewelry, purses and shoes. The Acropolis in March and April, on the other hand, with random wildflowers popping up on the paths leading to the Parthenon, is a tremendous site. And then there is late September to late October, when the “return” of the Athenians is finally complete, everyone rested and tanned from their August holidays. The Athenians are especially happy at this time of year. The musicians and singers start to return as well, but they aren’t yet heading inside, the weather in Athens in the fall is too nice to head to a covered venue. They’re filling the city’s numerous outdoor theaters like the Herod Atticus Theater (the Herodion), the theater on top of Lucabettus Hill, the Vrachon theater (the Theater in the Rock) as well as theaters in parks like Attiko Also, Kolonos and Papagou.

By November the daytime temperatures have settled into the mid 60’s, the Athens sun providing a pleasant warmth, runner’s from around the globe converge on Athens for the annual 42 kilometer Athens Marathon, and by American Thanksgiving tourists may reach its lowest point in the year, making late November the PERFECT time to visit Athens. Have you ever noticed all those postcards of the Acropolis with no one in them, but the weather is sunny and the skies an amazing blue? That is late November in Athens.

December is holiday time in Athens. The city puts on an amazing party and invites visitors from around the world to join the locals in celebrations throughout the city. The fact that most of these festivities are celebrated outdoors speaks to the mild weather in Athens in December. A rainy day here or there is a great chance to slow your pace, sip coffee in a local café, and act Athenian for a little while. My favorite spot on a rainy December day is an upstairs café in Thissio, Café Chocolate, where I watch the drizzle over the Ancient Agora, and admire the lush greenery the rain helps spring forth.

When the holidays end and January and February arrive, shopowevers throughout Athens now have a chance to announce further sales. It’s the second “sale” season, with post Christmas sales galore. It’s a great time for a short break in Athens, mixing your siteseeing with shopping and perhaps a Greek night club or two for live Greek music. You may have a rainy day or two, but that’s just more reason to spend time inside the Benaki Museum or the Museum of Cycladic Art.