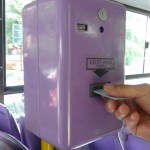 As if my mission to convince folks that you can’t do Athens justice in just 3 days wasn’t difficult enough, the modern Greek Gods of transportation in Athens, Greece (otherwise known as the “Athens Public Transport Organisation” have now gone and issued a “Three day public transportation ticket”. The 3-day tourist ticket will be valid for all forms of public transportion, including the Airport metro, the inner city metro, blue buses, purple and yellow trolleys (the ones with “antennas”) and the coastal tram, and an added bonus: the Hop On Hop Off Sightseeing Bus 400.

The 3-day metro/bus/trolley/tram ticket costs 15 euro and is available at the Eleftherios Venizelos airport (ATH), check for the kiosks near the Airport “X” buses, which travel into the city center and Piraeus; the Larisis and Piraeus Suburban Railway Stations (the Greeks call this the “Proastiakos”); Syntagma Square Metro Station and the Omonia Square and Pireaus stations along the Green line (this is the “old” ISAP or electric train line which runs between Pireaus and Kiffissia.)

Other transportation options for those staying just one day include the 3 euro ticket which is good for 24 hours and a weekly pass for 10 euro. Neither of these tickets include transport between the airport and city center or the Hop On Hop Off Bus 400 (of course, the Bus 400 needs to run consistently for this perk to be of much value – hopefully with the addition of the new Double Decker Red Sightseeing bus the public transportation Gods will do their utmost to make the Blue 400 Sightseeing Bus run a bit closer to its schedule.

DON’T FORGET to validate your ticket when you first start using it. You’ll need to do this at the first station/bus/tram/trolley you enter. Look for the orange or yellow boxes on the buses and trolleys, or the silver “tubes” in the hallways in the Metro Stations. Validation starts the clock ticking on your period of use, so you don’t need to revalidate it after the initial use (and you should not, as this will overwrite the time/date stamp and invalidate your ticket!)