Choosing a location to base yourself is tough in any city for the first time visitor, in Athens, blurring borders and neighborhood changes make it tougher

Basil and I recently took a trip to Africa. The beginning of our journey included a stay in Nairobi, where we planned on resting up for our two big treks, a 3 day walking safari in central Kenya followed by a challenging day trek to spend time with the Rwandan mountain gorillas. Our lodging was predetermined for those stages of our trip (in central Kenya: have tent, will camp; while in Rwanda we were booked at a lovely mountain eco-lodge), but for Nairobi we were given a number of choices, and as I prepared for the trip and agonized over my options: staying inside the city center (and if so, which part of the center) or on the outskirts; whether to book an international chain or a small family run inn, I began to realize just how overwhelming this decision must be for first time visitors to Athens.

Everyone, on every internet website, has an opinion, and many times the commentary about a particular hotel, or location, is conflicting. To further complicate matters, I realized that getting a “local” recommendation has it’s own pros and cons. My Athenian friends rarely see things with my American eyes, and thus their opinions are often shaded by their “Greek-ness” [read: an extreme passion which tends to lend itself to dramatic representations of things that many of us outside the culture might not find so dramatic].

I know it is really difficult to get a clear picture of what an area is like, especially when dealing with people from different backgrounds, many of whom are sharing information in a language that may not be their first language, and even those who communicate in the same native language often come from vastly different experiences (what is “close” and what is “far” in terms of distance? What is a “hard, long trek” to one person may be a short walk for another. I’ve learned that my urban guests come from a world where walking is their primary mode of transportation, and my suburban guests drive around the block to the pharmacy. So I’m going to embark on an ambitious plan. I’ve been out exploring Athens with my parents & visiting friends for the last year or so, compiling data, and I’ll be posting a series of “walks”. Mostly photo essays, with a bit of commentary, designed to give people an understanding of what Athens looks like, where neighborhood boundaries blurr, and most important, what a particular area is like at different times of the day.

Athenas street, home to the Central Market, the Cecil, Attalos and Fresh Hotels, 11:45 AM Friday

Athenas Street, home to the Attalos, Cecil and Fresh hotels, transforms itself from morning to night to early morning. For a couple of backpackers from New York City, this is a great location, and regardless of the time of day I’m guessing it would feel comfortable. For a suburban family from Philadelphia with teenagers, it might not feel equally “safe”. The same family with toddlers might be fast asleep before the night brings out the neighborhood’s more colorful side, so for them, again, it could be a fine place to crash for a few days. A group of 30 something women from LA may or may not feel comfortable walking the tiny streets leading to the center of Psirri at night, while two or three mixed gender couples from Chicago may have no problem with the rather grungy state of their surroundings as they cross from the Monastiraki side of Ermou into the narrow winding streets leading to the Ochre and Brown hotel.

Ermou around the corner from the Ochre and Brown Hotel, 11:30 AM Friday

And it isn’t just safety issues I’ll address. There are hotels on Syntagma Square and Vasilias Amalias street that may be fine options for someone used to the sounds of the city, while someone from a rural area may have a hard time sleeping with the background noise. (My home in Chicago is on a major bus line, and every night as I start to fall asleep I hear the bus calling out its next stop. When I visit my brother in rural northern California, I have trouble falling asleep in the silence! Conversely, when my brother visits me in Chicago, he has to drag his mattress to the bathroom so he can fall asleep!).

Before we start our journey through the streets and neighborhoods of Athens, it’s important to understand the size of central Athens, so you can see how the lines or borders between neighborhoods blur. The downtown area most visitors are interested in is smaller than Heathrow Airport, smaller than Golden Gate Park, smaller than Central Park in NYC (turned on its side). It’s roughly 2 miles wide, and perhaps 2 miles tall, including the far northern area where the National Archeological Museum is located. The archeological park, encompassing the Acropolis, the Ancient Agora, the Roman Agora, Hadrian’s Arch and the Ancient Cemetery, Keramikos, starts about at the middle and extends roughly westward, while the museum and garden area starts at about the middle and extends roughly eastward.

Within this 2 mile x 2 mile area you’ll find more than a dozen neighborhoods (perioxi, in Greek, or “areas”):

Unless you are a Realtor, real estate investor or business person interested in marketing to a particular audience, this blurring of neighborhoods isn’t important, except when it comes to searching for accommodations, since choosing only one “neighborhood” within the center can filter out some great properties in some really charming areas of the center. Of the above referenced downtown Athens neighborhoods included in this 2 x 2 mile area, 8 – 10 would be considered part of the “historical center”, and in fact, the archeological park area crosses in and out of 9 of them!

So instead of limited oneself to a searching in Plaka, (presumably with the understanding this puts one closest to the Acropolis), the savvy traveler might have a larger variety of choices by searching within the entire archeological park area. One might wonder about the Acropolis itself, which “technically” isn’t even in Plaka, but rather in Anafiotika (as Basil says it is) or in Makrigianni (where the visitor’s center is now being built and where the New Acropolis Museum is located. The Ancient Agora is sort of in Thisseio, but where’s the “border” between Thisseio and Monastiraki? The entrance to the Ancient City of Athens, Hadrian’s Arch, isn’t in Plaka at all, but rather across Vasilisis Amalias street, in Pagrati/Mets, or is Zappeio? And the Ancient Cemetery, Keramikos, is it in Keramikos or Gazi? Looking at the map closely, I think you can get the picture.

Our journey along the streets of Athens will take us in and out of the above neighborhoods: Athenas Street, where the Central Market is located, runs from Monastiraki Square to Omonia Square. Yet turn left on Ermou just outside Monastiraki Square and you’ll find yourselve at the crossroads of Monasteraki and Psirri, and just 2 blocks down at the square where Thisseio and Keramikos meet!

And speaking of Ermou Street, in just 10 minutes one can walk from Syntagma Square, turning left somewhere to head into “the Plaka” or right somewhere to head into a maze of streets that feel more like Omonia with their street vendors and wholesalers, or continue straight passing by Monastiraki and Psirri to once more land where Keramikos meets Thisseio.

On the other end of central Athens, the National Gardens begin next to and behind the Parliament building (remember, these were once the Royal Gardens, and today’s Parliament building once the Royal Palace). The gardens border Zappeion, perhaps the only truly clear boundary in downtown Athens, divided by Vas. Olgas street. But what’s this beautiful neighborhood, home to the President and Prime Minister of Greece, along with numerous embassy dignitaries and other monied Athenians, called? Smack in between Kolonaki and Pagrati, it has few business owners with motives for promoting it or giving it a name, as there is little commerce in this green triangle, but there’s museums (the Byzantine Museum, the National Art Gallery, the War Museum and the Museum of Contemporary Art (EMST)) and the soon to be opened Aristotle’s Lyceum, only recently discovered. And the announcement by the Ministry of Culture that the Lyceum will be opened and incorporated into the back of the Byzantine and Christian museum means this discovery extends the historical center further to the east than it had previously been.

Folk Music in Greece: Rembetiko and Laiko Music, a discussion….

The Athens Tourist Ticket Returns and other transport tips in Athens 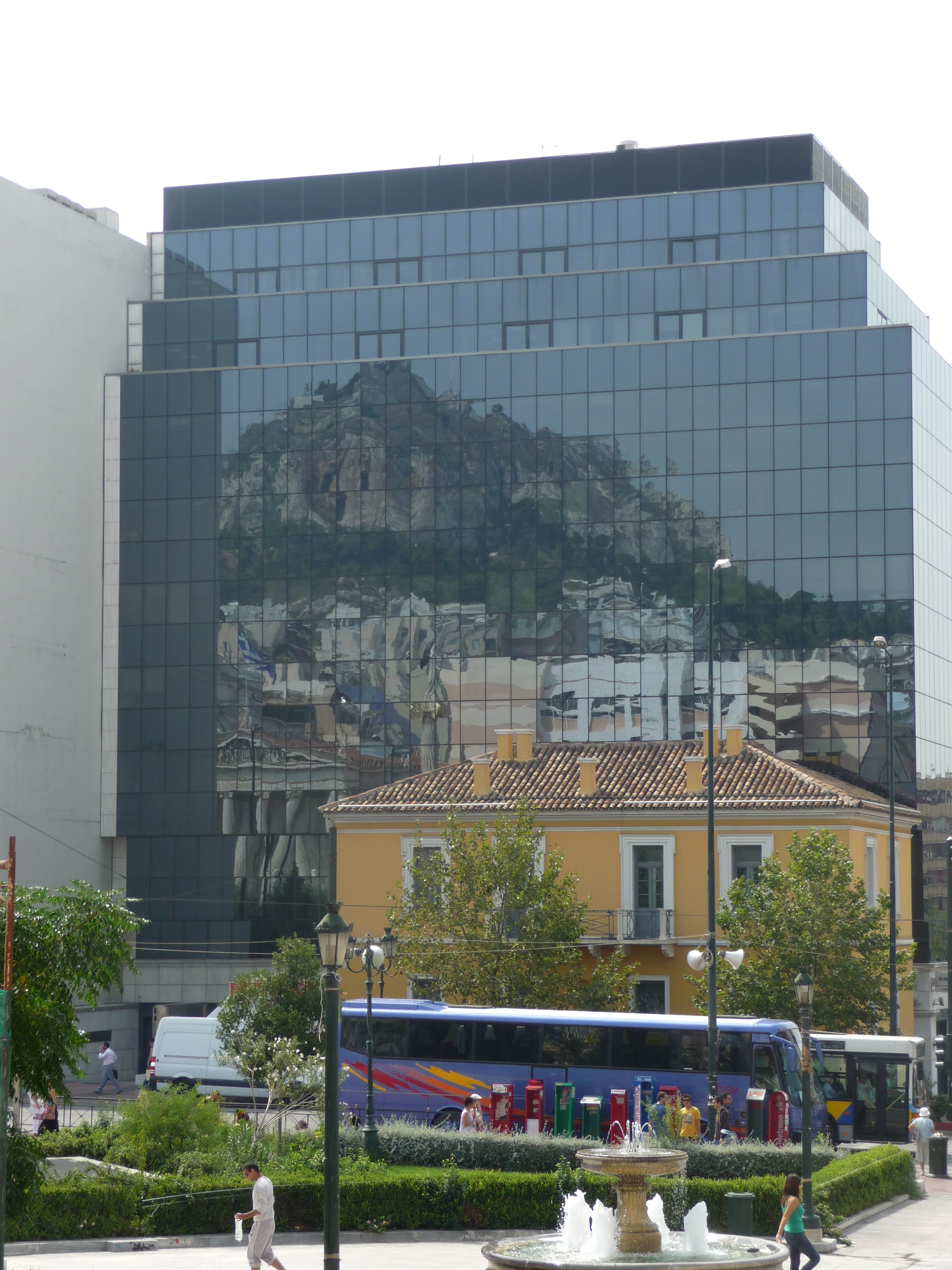 Wow, look at THAT building!