THE COMPLETE SCULPTURES OF EDGAR DEGAS 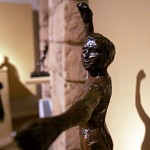 from November 27, 2009 until April 25, 2010
The Herakleidon Museum announces the opening of the exhibition “The Complete Sculptures of Edgar Degas”, which will be on show from November 27th 2009 until April 25th 2010. The exhibition presents all seventy-four bronze sculptures of Edgar Degas including his most important one “The Little Dancer, Aged Fourteen”. These bronzes are on loan to the Museum by the M.T. Abraham Center for the Visual Arts.

All the bronze sculptures in this exhibition were cast from recently discovered plasters made from Degas’ original waxes during his lifetime and with his consent. This is remarkable since all the other bronzes one can currently see in museums and elsewhere were cast from masters made after the artist’s death. Therefore, the bronzes in this exhibition can be considered the original versions, and all the others the second versions of these sculptures. Thus, for the first time, it will be possible for experts, scholars and the general public to compare the artist’s bronzes in the before and after states, which is almost unparalleled in the history of art. The exhibition also hosts the drawing of Edgar Degas Horses and Riders (1872, pencil on paper) from The George Economou Collection, Athens.

The Museum has published a special edition catalogue in three languages. The fascinating essay in this catalog by Mr. Walter Maibaum details the history of this discovery and the differences between the bronze editions. Dr. Gregory Hedberg’s revealing essay focuses on Degas’ most significant sculpture, “The Little Dancer, Aged Fourteen.” Dr. June Hargrove’s essay discusses the relationship between Edgar Degas’ two and three-dimensional works so that appropriate comparisons can be made.

The Museum has been selected as the organizer of this exhibition, which will travel around the world with Athens being the first stop. This exhibition will attract world interest since it is the first time Degas’ sculptures will be exhibited in Greece and the first time all seventy-four of these remarkable bronzes will be presented together.

“…This exhibition has many firsts. It is the first time Degas’ sculptures are exhibited in Greece, the first time all seventy-four of these remarkable bronzes are presented together and the first time visitors will have the opportunity to travel back in time. Let us explain this last remark. We have all heard of scientists using sophisticated equipment to discover a painting of a famous artist, Da Vinci for example, hidden under one of his later works. It was not uncommon for a painter to recycle a canvas, sometimes painting the same subject, but differently. Alas, one cannot access the earlier work without destroying the later, well-known version. In other words, one may travel back in time, but without the possibility of returning to the present.

The Herakleidon Museum is very proud to have been selected as the organizer of this traveling exhibition of these extraordinary bronzes. Our purpose is to make the works of this truly first modern sculptor available to a broader audience. On behalf of our staff and all our visitors, we would like to thank the M.T. Abraham Center for the Visual Arts for lending us its collection of these wonderful bronzes by Edgar Degas. We would also thank Mr. Maibaum and his wife Mrs. Carol Conn of The Degas Sculpture Project Ltd for giving us the opportunity to pay tribute to a man about whom Pierre-Auguste Renoir said, when comparing him to his contemporary, Auguste Rodin, that Degas “is the greatest living sculptor.”

Program of events related to the exhibition:

January 11, 2010, 8:30 p.m. auditorium of the French Institute: Concert with music from the time of the Impressionists, in collaboration with the Chamber Opera of Athens.

February 8, 2010, 8:30 p.m. auditorium of the French Institute: Lecture to be given by the sculptor Mrs Anna – Moschona – Kalamara, president of the Chamber of Art, on the work of Edgar Degas.

March 8, 2010, 8:30 p.m. auditorium of the French Institute: Lecture to be given by the art historian Mrs Irini Orati, curator of the collection of Alpha Bank, on the subject “Woman in Art”.

EDGAR DEGAS (1834 – 1917)
Edgar Degas (19 July 1834 – 27 September 1917), born Hilaire-Germain-Edgar De Gas, was a French artist famous for his work in painting, sculpture, printmaking and drawing. He is regarded as one of the founders of Impressionism, although he rejected the term and preferred to be called a realist. He was not interested in the outdoors. He worked in his studio, with models or more often from memory. Early in his career, his ambition was to be a historical painter, a calling for which he was well prepared by his rigorous academic training and close study of classical art. In his early thirties he changed course, and by bringing the traditional methods of a historical painter to bear on contemporary subject matter, he became a classical painter of modern life. A superb draughtsman, he is especially identified with the subject of the dance and over half his works depict dancers. These display his mastery in rendering movement, as do his racecourse subjects and female nudes. His portraits are considered to be among the finest in the history of art.

1 thought on “Edgar Degas Sculptures at the Heraklidon Museum”