The World South of Athens

My friend Yorgo Filippakis  recently sent me a great report on a trip he took down the coast to Cape Sounion.

As an Athenian, I am often surprised to hear even Greeks wonder if there is anything south of Athens. This is why I always try to take visiting friends on a drive down the western coastal road. This almost 40-mile trip from the city center leads through a series of scenic cliffs, beaches often invisible from the main road and country houses to cape Sounio, the southernmost tip of Attica, popular for its romantic sunsets.

This place witnessed one of the most breathtaking tragedies in Greek mythology, when a father, the king of Athens Aegeas, threw himself over the cliff at the sight of the black sails on the boat bringing his son Theseus back from Crete, where the latter would have fought with the Minotaur. Theseus beat the Minotaur but carried away by the joy of victory, he and his crew forgot to change the sails to white, as was agreed before departure. Aegeas, waiting on the high rock overlooking the sea to the south, saw the black sails, believed his son had been killed and jumped off, into the waters that later took his name, the Aegean Sea.

Today, a temple stands on this same rock, built during the “golden” fifth century BC of Athens to the god Poseidon, god of the sea. It is said that on a clear day, standing on the rock of Sounio one can see the other two most important temples in the region, the Temple of Athena Aphaia on the island of Aegina and, of course, the Parthenon on the Acropolis. The temple of Poseidon is almost an equal distance to those two temples (approximately 27 miles on a straight line) and these three form an isosceles triangle, giving birth to theories about how applied geometry was used in Ancient Greece to a larger extent than one would expect.

[Side note from Carole:  When I first visited the Temple of Poseidon at Cape Sounion over 20 years ago, there were no ropes and guards prohibiting visitors from climbing onto the temple, searching for the infamous Lord Byron’s named carved into the rock.  In fact, both before Byron and since many have chosen to preserve their visit and / or love for eternity by engraving their names in this ancient stone:  Alas, modern archeologists and the Ministry of Culture finally saw fit to protect this romantic site from today’s modern young lovers, and now we are all banned from ascending the rocks — And though there is no proof that Byron actually personally carved his own name during one of his two visits to the site in 1810-11 while living in Athens, if you have a really good digital zoom you may find the name Byron carved in the square column at the end of the Temple]

So instead of entering the temple, you might want to turn your back to it and gaze at the endless Aegean Sea and you will be able to spot two islands. You are now looking south and to your left, in the east you can see part of Makronissos, this barren land of exile, where junta dissidents were sent from 1967-1974 to be questioned and tortured. It is no wonder that since that time not many Greeks have wanted to set foot on this island, which ironically translates to “Long Island” and which today hosts a refugee settlement and a few beehives.

The second island it far away and slightly to your right and its name is Kythnos, the first Cycladic island passed by the endless parade of ferries heading toward the more popular Cycladic islands of Paros, Naxos, Santorini and Mykonos.

My favorite taverna in the area, Akrogiali, down at the beach, was closed the day I visited, so I decided to have lunch at the café which is right next to the bus stop and the entrance to the site. Here, you can either have coffee or lunch with a view of the temple and the sea. The café/restaurant was simply but tastefully remodeled for the 2004 Olympics and has been kept that way ever since. A very kind waiter brought me a beetroot salad, a dish of tasty Greek meatballs and a club soda, which cost me 18 Euro and came with grilled bread sprinkled with olive oil and oregano. Their menu features all typical Greek starters and salads (at around 5 Euro a plate) and meat entrees (starting at 11 Euro) as well as fish (fish prices fluctuate with the market rate and the season). Their wine list included bottles from various famous Greek producers. It was unfortunate that they did not sell a house wine by the glass or by the carafe, something you will find in restaurants almost everywhere in the country. Their smallest bottle was an average quality Greek wine priced at 7 Euro for 375 ml. They serve a variety of deserts for about 5 Euro a piece as well as coffee and there is a tourist shop adjacent to the restaurant.

Their food is simple and quite tasty, the view is beautiful and one can sit out in their veranda even in winter, thanks to their transparent enclosures and outdoor heaters.

The archaeological site is open from 9:30 AM and you can enter until 30 minutes before sunset. It closes right after sunset.

Entry price is 4 Euro for adults, 2 Euro for seniors age 65 years and older as well as for non-EU students and free for EU students.

KTEL Buses leave from Pedio Areos and you have the choice of two itineraries: coastal and inland. 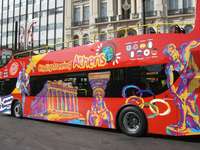 Travel to Monastiraki with the birds of Greece