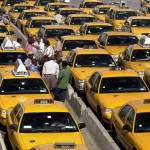 Athens taxi drivers seem to have a larger than life reputation as being sharks swimming around touristed areas, airport, ports, bus stations and archeological sites waiting for the unsuspecting tourist so they can devour the the naïve foreigner before they’ve discovered they’re missing their left leg along with their wallet …
The truth is that there are unscrupulous taxi drivers, but that the vast majority of drivers tourists will encounter are drivers who make their living working with tourists and travelers and derive no benefit from perpetuating the bad rep that Greek taxi drivers have gotten over the years.
In fact, most tourists and travelers who book pre-arranged transfer and day trips are highly satisfied with their experiences, while the vast majority of consumer complaints about drivers overcharging or not running a meter, etc come either from locals (Greeks!) or from travelers or tourists who picked up a random taxi near the Acropolis or the National Archeological Museum. Come to Athens prepared, know what to expect when you get into a taxi that you hail on the street, (not just rates, but also about how many passengers may ride in a taxi) be prepared to snap of photo of the taxi license of the offending driver and to tell him to turn on the meter, or save yourself the stress and prearrange your transfers if you don’t have desire to argue …

UPDATE (beginning January 2011) :  Beginning in 2011 there has been a fare increase resulting from the VAT increase in Greece. Taxi rates in Athens are now 13% higher than they were in March 2010.

Taxi fares are governed by law, and to find out what the REAL story about taxi fares is as of March 1, 2010, we contacted the taxi union where President Liberopoulos and General Secretary Kostas Dimou provided us with a copy of the current taxi fare rate card and walked us through the legalities surrounding taxi travel:

Rule Zero:
Anytime a passenger is in the taxi (according to one driver “even when my wife is in the taxi with me!”) the meter must be running. This means that even when you have prearranged a transfer, with a pre-agreed price, the meter is running once your taxi transfer begins. In the case of a pre-arranged pick-up at the port or airport, this means the meter starts running when the driver arrives at the port or the airport – even while they are waiting for you in the Arrivals Hall or at the end of the ferry or ship’s ramp, their meter is clicking away inside their taxi. And, if you’ve prearranged to pay a set rate, perhaps 45 or 50 or even 55 euro from the airport, you may discover that you’ve gotten yourself a deal over paying what the meter says; or at least you can console yourself by realizing that you had a trouble free, hassle free and wait free arrival and pickup which you actually paid very little for, given the service you received.

Continue reading to determine if the myth of the “taxi transfer rip-off” is fact or fiction:
1. The meter drop is 1.05 euro
2. Within Athens, rates click at .60 euro cents a km (.72 after May 1, 2010)
3. Outside of Athens city limites, rates click at 1.05 euro cents a km (1.20 after May 1, 2010)
4. To and from the airport, a surcharge of 3.40 euro is added to the meter drop and the per km click charge
5. To and from the ports, train station & bus station, a surcharge of .90 euro cents is applied
6. Radio taxis (calling in for a taxi right now) has a surcharge of 1.70 euro.
7. Radio taxis (prearranged appointment) has a surcharge of 3 – 5 (After May 1, 2010, 3 – 7 euro)
8. Waiting time: Charged at 9.60/hour for up to 20 minutes …. Anything beyond 20 minutes, the hourly rate can be negotiated between the driver and the passenger.
Rates are also higher between midnight and 5 AM within the city limits (1.05 euro)
So, if you’ve made an appointment for a taxi to meet you at the airport when your flight arrives, you will probably be quoted a rate of 40 – 50 euro. If you were to break down the charges analytically, you’ll find that it works out to this:
1.50 meter drop
3.40 airport surcharge
34.65 fare clicked per km (33 km from airport to Syntagma Square – tarif 2)
39.55 euro, fare clicked per km (based on above 33 km) without an appointment – wait in line, get the cab you get.
44.55 euro, fare clicked, per km with a pre-arranged appointment (with 20 minutes waiting time) the driver arrives at the airport, comes inside to wait for you 5 minutes after your plane lands, and it takes you 15 minutes to walk to deplane and walk to the Arrivals Hall – assumes that you have no luggage –.if you’ve got luggage, remember that the meter is running in the driver’s parked taxi, so you are paying for waiting time, up to 9.60 euro for the first hour of waiting (according to the rate card, although after 20 minutes the driver can, by law, charge whatever he wants for waiting time. There is no specific limit, see the next paragraph.)

When pre-arranging a pickup that requires a wait of more than 20 minutes, the driver and the passenger may come to their own agreement regarding the cost of the transfer and the amount charged for waiting time. Thus, when you contact a transfer service and they tell you a set fee for an airport or port transfer, or for a day trip, they are building in a PRE-SET rate based on the fact that they will be waiting for you for more than 20 minutes during the period of time that you have reserved them for. This is legal and stated clearly on the rate cards posted in all legally operating, licensed taxis in Greece. 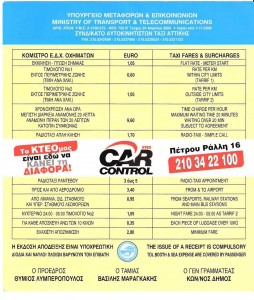 Official Taxi Rates as of March 2010 in Athens

Taxis are also required to issue a receipt if one is requested, which might be the same as the following standard order form all drivers must have with them when arriving for a pickup. When you book a pre-arranged transfer, pickup or day trip (to or from the airport or port or a day trip) your driver will arrive with one of these forms completed. It will include your name, the number in your party, where you are being picked up, how you are arriving (boat, plane, etc) and the possible time of arrival. It will also include the order number and how the order or request was placed (from a Radio Taxi dispatcher, from a travel agent or hotel or directly), along with the taxi driver’s license number and any other important notes regarding the pickup. 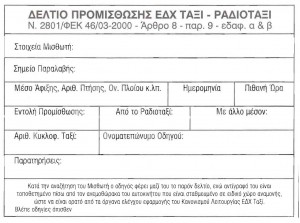 The above form is very important for drivers picking up at the airport, since, as the bottom box above reads:

While the driver is attempting to locate the Passenger, [the driver] shall carry with him/her this page; a copy of this page shall be placed at the windshield of the car that is parked in the special waiting area. [this copy shall be placed] in a conspicuous location so it can be seen by the Taxi regulations enforcement authorities.

It’s this “order form” or “taxi pickup request” which permits the driver to leave his car parked outside the airport, and which authorities can request the driver produce at any time while they are in the airport (or port) area or departing the airport or port area with passengers.  Being caught without this form can result in serious, income impacting pentalities for the driver.