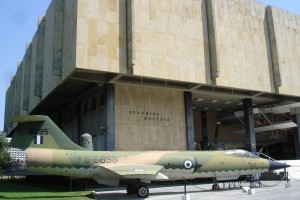 For years I strolled down Vasilias Sophias Avenue, past the War Museum, always thinking it strange that there would be such a museum. OK, once or twice I was almost “inside”, with my son or husband, both aviation fanatics, to inspect the collection of aircraft parked on the backside of the museum, but never was I curious enough about the contents of the museum itself to actually venture into the museum. Its inappropirate naming is unfortunate, because thanks to my father (well, it was my mom who suggested we go, hoping that it would entice my father into moving from his computer, where he spends way to much time, alternating between watching the Parthenon out the window and his computer screen – shameless plug for our Acropolis view apartments) I’ve recently discovered that the museum is actually a wealth of information, and makes for the perfect place to visit immediately upon arriving in Athens.

The War Museum, which until recently was free and thus really was a no brainer as a first stop when arriving in Athens, makes a great first stop in Athens because it’s laid out chronologically, and thus it offers a concise overview of the history of Greece.

Of course for military buffs, particularly World War II buffs, the museum is an excellent source of information on the role played by Greece as part of the Allied Forces. It also offers some interesting stories about Greek women in war, as well as some interesting cultural insight into the representation of Greece through the political cartoonist’s pen, and even a special section  documenting Greece’s involvement in Korea, something that is often overlooked or unknown by most people.

The War Museum is located at 2 Rizaris and Vas. Sophias – Verify opening hours by calling 210/7290543.   Hours as of March 2010 are Tuesday through Saturday, 9:00 AM to 2:00 PM, and Sunday from 9:30 AM to 2:00 PM. Admission is now 2 euro. It’s about a 10 minute walk from Syntagma Square, the lazy can take the metro to Evangelismos Station.
My dad, Bob, a happy guy checking out the airplanes in the Museum’s outdoor exhibition area, walked from our Acropolis View penthouse – so if you’re a guest reading this, if this 81.5 year old can do it, so can you. 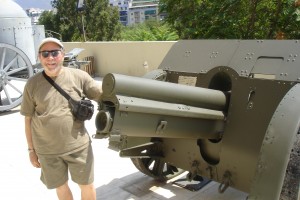