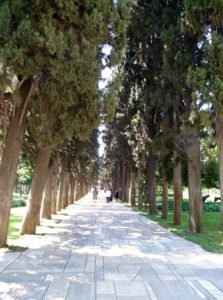 The secret’s out, Greek President Karolos Papoulias has flung open the gates to his private garden, a 25 acre green space on King George and Herodou Attikou streets, adjacent to the backside of the National Gardens, and Athenians of all ages have discovered a new place to spend their Sundays.

The garden, which used to the the vegetable garden for the King of Greece, was once only accessible by special invitation.  It was designed in the French style, presumably by Schiller, but with flora native to Greece.  The tall Cyprus trees that grow throughout the grounds are original, some over 100 years old.

The garden is open on Sundays from 11 AM to 3 PM. Admission is free, but you must bring a photo ID (passport or other government issued ID card).  Purses and backpacks will be searched and screened.

The gardens, which are entered through a tunnel that runs under the Presidential mansion, are situated on two levels.  Thus, the main entrance has a series of wide marble steps leading down to the lower level.  Wheelchair uses, those who are step challenged, and even parents with strollers are welcome to access the garden from a side entrance, just be sure to let the security agent at the main entrance know you’d like the accessible entrance if your stair challenged need is not obvious (wheelchairs and strollers will be directed to it automatically).

The President’s mansion security team get special kudos for their smart handling of their first ever visit by a service dog.   The concept of service dogs is pretty new to Greece, (we even witnessed an access challenge at the Lighthouse for the Blind’s Museum in Athens last year!) but the President’s guards scrambled to figure out how to handle a service dog’s admission to the “dog access prohibited” garden, since, from the point of view of the Greeks, a dog is a dog is a dog, regardless of whether they are a working dog or not: and the sign at the entrance says: NO DOGS.  In the end, the team was directed to the side entrance (although the dog was a hearing dog, and steps were not an issue – I guess they assumed that it was a seeing eye dog and that steps might have been an issue?)

Ever Wonder what Photographers Collect on their Travels?

Travel to Monastiraki with the birds of Greece