The last few days I’ve been getting alot of emails and phone calls as Greece makes headlines in newspapers and on newscasts around the globe. I thought it might be worth sharing my take on things, as I wrote it to one of our guests who is arriving in Athens in a few days, since alot of folks are asking if it is safe to travel to Greece:

I’m in Athens right now and though I can tell you that much of the news is very exaggerated, it may or may not help with your concerns. The Greeks invented drama, and the media perfect it. (Nobody talks about the train worker strikes in the United Kingdom [latest action to be May 10, there have been about a dozen strikes since the beginning of the year, along with British Airways cabin crew and I’m not sure who else] and the train, ferry and trucker strikes that have plagued France on and off for years, and that Lufthansa pilots having called several strikes this year … I guess they just aren’t as loud in their protests as the Greeks!) If you are brave, visit the Easy Travel Report – but beware because you will probably chuck the entire idea of traveling anywhere at all if you follow the reports on this website:

I’ve gotten a number of calls in the past few years (since I started opening our homes) during times when Greece was in the news, and I’ve written a bit about it on my blog:

Last year, when “all of Greece was on fire” I wrote:

and, the year before, when a boy was killed during an altercation with police which caused a lot of press, I wrote this:

In this last one, be sure to read the comments section.

From where I sit overlooking a largish commercial street, half of which is pedestrianized and full of cafes, the Greeks by and large seem oblivious to the “crisis” and are going about their lives – Yesterday I went out to the local home improvement store, and ironically despite a number of civil servant unions being on strike, the store was packed:

As far as safety is concerned, I think that this next photo speaks to just how safe things are here. Basil and I were walking our dog in the square in front of the old Olympic Stadium. It was around 11 AM on Friday, and there were the typical two or three tour buses parked out front, a few groups of tourists taking photos of the Stadium and some mingling around the café that has just opened there (they’ve just started opening the Stadium to visitors – 3 euro gets you admission and an audio tour) and three men crossed our path. One of them looked very familiar, and I pointed to him and told Basil, “doesn’t that guy look just like George [Papandreou]?” Basil laughed, and said “yes, poor man” (it is tough to look just like the Greek Prime Minister these days). As we got to the stop light, the tall man pushed the button and turned in my direction to speak to the man next to him – and I realized it was in fact George Papandreou, the prime minister of Greece, pushing the button to wait for the stop light 4 feet from me! One secret service guy stays a few feet from him, but other than the 5 of us at the stop light, there were no other obvious security guards or police anywhere in site. (When Obama comes to Chicago the entire city shuts down, so this was something quite dramatic for me).

Finally – I recommend searching for old articles from journalists like Charles Bremmer – like this and this, who has spent alot of time on the ground in Athens and in Greece and actually knows a bit about the country from first hand experience, not from behind a laptop, Google and Wikipedia screen.

And though this last post just further demonstrates why it is wise not to stay at one of the three fancy hotels along Syntagma Square (unless you want a birdseye view of the protestors), Basil and I did walk through their yesterday on the way to a meeting and other than seeing perhaps 150 -200 civil servants demonstrating (out of almost 400,000 union members!), we didn’t experience any of what the international media are describing. In Charles Bremner’s post linked above, he notices this as well: in the last paragraph he writes about this – it is very similar to what I witnessed walking through Syntagma two years ago.

“A few hours later, I see that the global news channels are up to television’s usual distortion. They are using close-in shots from the demonstrators’ very limited skirmish to depict Greece rioting against the new austerity.”

His findings reflect my conversations with the Greeks: they are upset about things, but they seem to fall into two typically Greek camps: those who want to blame others for the latest problems and those who see this as an opportunity for things to change dramatically here. Only time will tell which is going to happen, but in either event, I do not believe the country is going to fall apart completely and be left with chaos ruling the streets. From where I sit in the one of the Acropolis View apartments, I can see the Parthenon still standing (without any consequences from yesterdays “storming” by 200 radicals), people are beginning to wake up, sweep the sidewalks along Imittou and Chremonidou, open their shops, and look forward to another day of work no differently than shopkeepers in any other place in the world.

I personally don’t see any reason visitors should not come here, nor do I see any threat of danger or physical harm in traveling here. I do expect there will be more strikes (strikes, demonstrations & protests are a way of life here), today the airport is closed for 24 hours as air traffic controllers strike along with other civil servants – this was announced over a week ago, which is typically the case. They don’t have anything new posted for the time you are here – but it is always possible they will announce another strike which could somehow impact your travel plans – that would be the only thing I can anticipate possibly impacting your trip. (And, as a side note, the Iceland volcano started to erupt again yesterday closing Irish and Scottish airspace this morning – so there are still other factors that could impact your travel plans).

So, that’s my take on things here.

PS I wrote this email before a fire in a downtown bank tragically took the lives of 3 bank employees. I am deeply saddened by this but from all accounts being reported here in Athens and talked about on the radio and television, this seems to have been a case of a smallish group of instigators who were trying to cause physical damage to property – something that has been, unfortunately, pretty common during these types of demonstrations. In the past it has been in areas that would not impact the day to day comings and goings of most Athenians and of most visitors. While this was all happening, Basil and I went shopping and out for lunch, and then up to the top of Mount Lykavittos for coffee. None of these things were impacted by today’s events, other than one road closure which required us to detour around the parliament building to get home. I didn’t have a camera, but I did take some photos with my phone overlooking the area at Syntagma Square where the alleged “100,000 demonstrators” were “burning the entire city”: 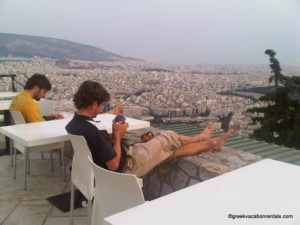 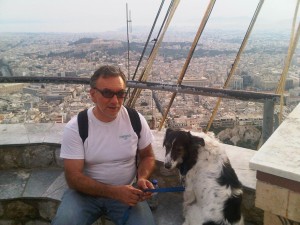 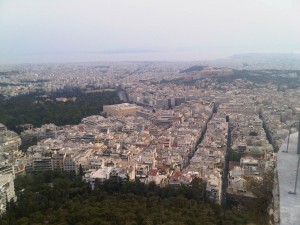 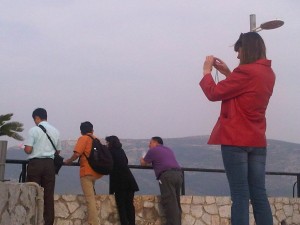 One wandering Jewess, one Greek guy and their Greek dog … 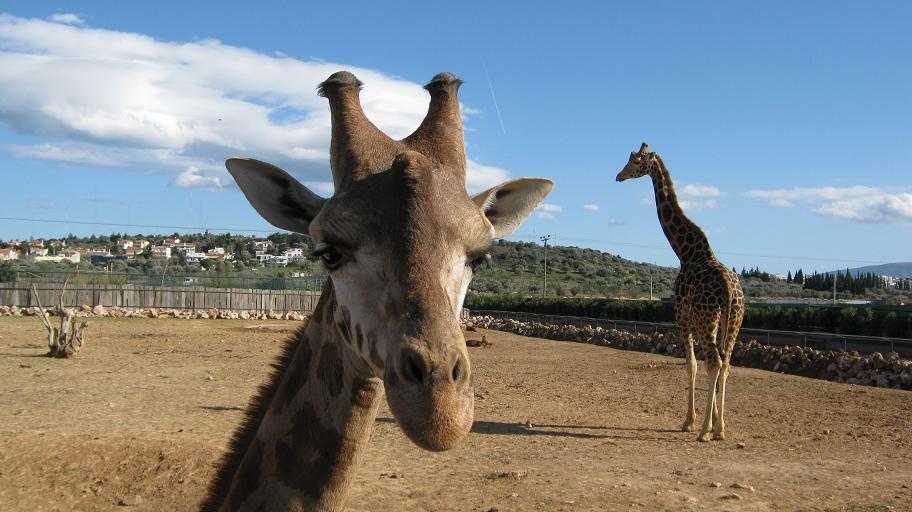 Christmas at the Zoo