A 40 minute walk that changed my life 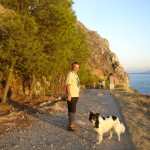 My wife, my dog and I were walking in Nafplio, the first capital of Greece after the Ottoman occupation, and as is the custom of all the locals, we were walking along the promenade. The promenade itself is long, 2-3 km and at the far end of it, it has an arm, really a pier-like breakwater, that jets out into the sea. We are not from Nafplio, but we come here often and always do as the locals do, stroll, or “volta” down to the end of the breakwater and back.
This time, we were a little early for the evening walkers and as we reached the end of the promenade, right before we turned right to go to the breakwater pier, we noticed a walkway to the left, a flagstone covered path that we had not noticed in the past, we asked one another if this was new, and we both agreed it must be new.
Nafplio is built around two huge rocks with fortifications on the top, the Palamidi and the Akronafplia.
This walkway went around the Akronafplia which is closest to the port. We assumed that it would have been a short walk, sort of like the breakwater pier at the harbor.
We walked on the flagstone path looking up at the fortifications, the path wound itself at the edge of the sea and we could see the sparkling clear water below and the fish swimming in it. To our right, between the path and the sea below, a waiter prepared 4 tables which were set on a small pier at the water’s edge. Next to the pier, we saw another, lighting candles on tables in a dining room which seemed to be built upon the water. As we continued, a long pier came into view. We stopped and stood on one of two wooden terraces built just above the water, overlooking the pier and the café. My wife commented that it reminded her of the swimming area on the lake were she spent her summers at overnight camp. Jetting out into the sea, turning and running parallel to the path we walked on, it met a second floating pier which created a horseshoe as it wound back to shore. Along the pier oversized couches were filled with people, sipping iced coffees and wine, waiting for sunset. In the center, a few locals bobbed up and down in the clear waters, the traditional late afternoon swim on a hot summer afternoon.

The path wound around again and again hugging the tall rock like a ribbon around a present. We saw and met families, couples, joggers, bicyclists, people with their dogs, friendly people, people with smiles on their faces, people that were enjoying the walk as much as we were. Every once in a while, there were stone stairs that led down to the sea, either to a tiny flat that one could swim off or a rock outcropping for fishing. Neither one of us was prepared for the rare treat that we were experiencing. We had never read about this walk in any of the guide books.
It was a discovery, a discovery one can only make by walking and deciding to go to the less traveled path – even though, this was hardly a path less traveled. The path was not crowded, but there were enough people of all ages and genders to assure us that we were not at the wrong place but never so crowded that we wished for less people. At one point, about 30 minutes into our journey, the rock became shear to the point that they needed to open a tunnel through the rock to continue the path on the other side. It is a small tunnel, but such a wonderful surprise. All along the path there are park benches that look out to the sea. Not because it is a tiring walk, but it is necessary to take in the light breeze and smell the pine forest from below mixed with fresh smell of the sea.

Our dog, Scruffy, led the way in a happy prance, smelling and examining every bush and tree. He seemed to have a smile on his face. You know, the way happy dogs hold their mouth half open and curve the back of the mouth upwards.
The flagstone path ended at the Arvanitaria beach about a mile north of the point we started. Arvanitaria beach is an organized beach, small with smooth pebbles very inviting for a swim, unfortunately, because we did not now where we were going, we were unprepared. So my advice is take your swim suit, or better yet wear it, wherever you go in Greece. There is always a gem of a beach wherever you go, just around the bend of the road. So you have been warned, be prepared.
At that point there was a large parking lot where many of the European motor home travelers park their vehicles. It is between the Palamidi and the Akronafplia castles.
At the other end of the parking lot we could see a road that continued northward. Now this had become a quest, we did not know where we were, I read the sign for the beach on the sign, all we knew is that people kept coming from the other direction, so we had to investigate. The road on the other side of the parking lot was a short one, a couple of hundred yards long, becoming a wide gravel trail that kept going northward, huging the coastline to our right and the rock wall to our left The cliffs to our right were shear and smooth in brown, tan and grey shades, with holes here and there where the seabirds and the bats nest. The right side was a steep slope covered with pines and prickly pear cactus. The prickly pear cactus is not indigenous to Greece and to me it was a rather disturbing sight because they are an invasive species and should be controlled. Nonetheless, they are beautiful and they were growing everywhere, up the steep cliffs, on the side of the path, everywhere with their pale red fruits at the edge of their leaves.
The path was absolutely clean, despite the number of people that obviously use it.
One point of clarification, Greeks are not very health conscious and long walks and jogging are not the norm. This was definitely outside of the norm, there were younger people jogging, but there were also older people there, too.
Walking around the winding path and looking up at the shear cliff you can clearly see why the ancients decided to build there castles at this location. Formidable, inpenetrable, unconquerable. The castle has views way out to the sea and the surrounding valley. No one could have approached the area without being noticed.
The smooth dirt and gravel trail keeps winding around changing vistas, every turn of the winding path is a new experience for the senses. The late afternoon light plays with the shapes and the shadows showing the different shapes, anything your imagination can make of them, from faces, to animals. The sky was clear blue with some wisps of high altitude clouds that by this time were showing their evening colors, from soft peach to deep violet.
It was about 8:00 pm, leaving us with about an hour of light. Under normal circumstances we should have been turning back. But we felt like kids in the midst of a discovery adventure. We wanted to see where the path led to. There were plenty of people going our way and coming back, so we were encouraged to go on.
We started talking to a family, they were very happy to be on the trail and they told us the path ended at what we understood to be the town of Karathonas. The man, in his early 50s pointed out to another point on the peninsula across the bay where the little church of St. Nicolaos, the patron saint of the sailors, stood, contrasting its white color against the shear brown and gray cliff above it. I imagined this must have been like a lighthouse for the fishermen, a welcome site that they were close to home coming back from the sea, especially if the sea had been rough, “Almost home, a little further and I will see my wife and children, Help me St Nicolaos, Help me and I will light a candle as tall as I am.” The fisherman with the face sculpted by the sun and the seawater would have thought and promised as he battled the last part of his journey back home.

Nafplio is easily reached from Athens by car, private taxi or public bus. The drive via Argos takes 90 minutes.