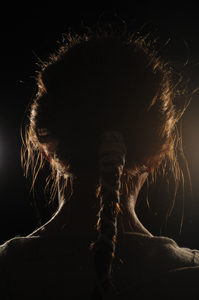 Near entrance 1 on the Arrivals Level – check it out after you’ve checked yourself in and before you leave the airport.

“Myrtis: Face to face with the past”

The airport exhibition, staged in cooperation with the scientific team of orthodontist, Assistant Professor at the University of Athens, Manolis Papagrigorakis, succeeds the first presentation of the reconstruction of the young Athenian’s face at the new Acropolis Museum, and the equally exciting display at the Goulandris Natural History Museum.

In 1994-95, during the excavation works for the Athens Metro construction, a mass grave with 150 bodies was discovered in the Keramikos area, where the ancient cemetery of Athens was located. The remains were found to be dating from around 430 – 426 B.C., the time of the Athens plague. It was then decided to carry DNA tests on the skeletal material aiming to identify the pathogenic factor of the deadly epidemic, which was found to have been the typhoid fever. Among the bones, a skull of an 11 year-old girl was discovered; the young Athenian was named “Myrtis” by the archaeologists. The excellent condition of the scull inspired the orthodontists’ team to reconstruct the girl’s face.

The significance of the exhibition

After 2,500 years, Myrtis “is reborn”. This exhibition brings out the great significance of the use of technology, and of interdisciplinary collaboration in many different fields of research, such as archaeology, medicine, anthropology, and forensic science. Greek and European scientists, technicians and artists, shared their knowledge and expertise, to get as close as possible to the real face of Myrtis.

The exhibition consists of 3 sections: the first section presents the excavation at Keramikos, the second displays medical research in Greece for the identification of the pathogenic factor that caused the plague of Athens, applying the methodology of French Professors of the University of Marseilles, and the third section portrays the reconstruction of the face of Myrtis.

From the Goulandris Natural History Museum, the exhibition will travel on to other destinations, first the National Archeological Museum in Athens and then the Archaeological Museum of Volos, the Cultural Institution of the Piraeus Group, as well as to the U.S.A. where it will be displayed at the University of Missouri.

Athens International Airport invites passengers and visitors to the airport’s new photography exhibition, on display from June 1st through to December 31st, on Arrivals Level / Entrance 1. The exhibition area is accessible for all airport visitors on a 24-hour basis.