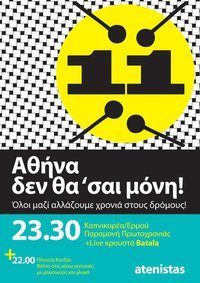 I just love this group, the Atinistas.  Not only are they a fabulous group of Athens loving citizens who have come together at a challenging time in Greece’s history in order to effect positive change in the city, but they’re also amazingly creative and terrifically giving.  So this New Year’s Eve, if you really want to feel like a local, why not head over to Kotzia Square (cross from City Hall on Athenas street) and join them in a “volta” procession around Athens’ downtown neighborhoods. There’ll be music (and maybe some imprompto dancing) and they’ll be handing out traditional Greek sweets to those they meet along their journey.

If you’d like to join the procession, bring along a box of sweets: it can be anything, cookies from a bakery, a box of chocolates, though I love the idea of “melomakoronada”, honey spiced cookies, since I’m from a clan that believes strongly in welcoming in the new year with sweetness, and honey is perfect for that.

At 11:30 the procession will meet on Ermou street at the Kapnikarea church (that’s the beautiful church at the crossroads of the pedestrian part of Ermou street, roughly between Syntagma and Monasteraki Squares). Bring your own wine, hot chocolate, champagne or whatever you’d like for toasting in the new year, or enjoy a glass of warm mulled wine – they’ll have glasses and join together with a very special group of Athenians in ringing in 2011.

The Atenistas are promoting change and something of a homegrown “take charge” movement within the city. It is impossible to witness or participate in anything they do and not feel a tremendous sense of optimism about the future of Greece.  They are a refreshing breath of fresh air when you’ve been inundated by English language media telling you that Greece is doomed.  If you choose to head out to the streets of Athens with this group you’ll not only have an amazing New Years Eve, but you’ll also have a chance to meet some fantastic locals (most of whom will gladly share their views with you — in English :-)

I promise you, this won’t be a New Year’s you’ll soon forget.

Interested in learning more about Atenistas? See them in action on the streets of Athens in the following videos:
“Batala” percussion parties happen pretty regularly (could be a taste of New Years Eve)

Here’s an “>AthensLiving video about their volunteer work in cleaning up the city: