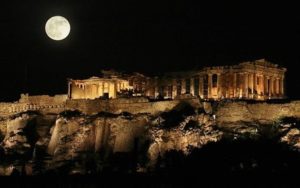 Happen to be in or around Athens on August 13 and looking to escape the crowds that will pour into the historical center for the Full Moon under the Acropolis (which isn’t actually going to be open … but there’s lots happening there, including another concert).

The fifth annual Aegina Music Festival will host a concert at the Temple of Aphaia on Saturday August 13, 2011.

Concerts take place in a variety of locations around the island:

The Festival runs weekends through September 2, 2011.

How to get to Aegina from Athens by ferry or hydrofoil

Ferries between Athens and Aegina take between 60-90 minutes (sit on the deck, close your eyes and feel the wind in your hair).  You can get to Aegina by taking the Hellenic Seaways Ferries (blue, white & red), Nova Ferries (red) or the Agios Nektarios Ferry (light yellow). The Nova Ferries are the most luxurious ferriy. Ticket prices range from € 8,50 – € 9,50 for a one-way ticket. Timetables are posted at the ticket kiosks at the port, (docked ferries also display their departure time above the door.  Purchase your ticket at the kiosks outside the door or online, see links below.  If traveling during peak season or on weekends or holidays, be sure to purchase a round trip ticket before departing from Athens (Pireaus).