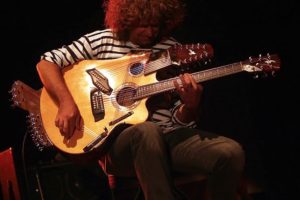 It’s been 19 years since jazz guitarist Pat Metheny last performed in Greece and this December he’ll be back as part of the Pallas Theater Jazz Master series – accompanied by the rest of his trio, Larry Grenadier (bass) and Bill Stewart (drums).

The Kansas-born Metheny has achieve international acclaim with his music, and his collaborations with musicians in both the jazz arena as well as in other genres, including David Bowie, Herbie Hancock, Ornette Coleman, Joni Mitchell, Chick Corea, Dave Holland, the great Pastorius, Charlie Haden and many others. It is one thing to attain popularity as a musician, but it is another to receive the kind of acclaim Metheny has garnered from critics and peers. Over the years, Metheny has won countless polls as “Best Jazz Guitarist” and awards, including three gold records for (Still Life) Talking, Letter from Home, and Secret Story. He has also won 18 Grammy Awards spread out over a variety of different categories including Best Rock Instrumental, Best Contemporary Jazz Recording, Best Jazz Instrumental Solo, Best Instrumental Composition. The Pat Metheny Group won an unprecedented seven consecutive Grammies for seven consecutive albums. Metheny has spent most of his life on tour, averaging between 120-240 shows a year since 1974. At the time of this writing, he continues to be one of the brightest stars of the jazz community, dedicating time to both his own projects and those of emerging artists and established veterans alike, helping them to reach their audience as well as realizing their own artistic visions

Online: www.ellthea.gr and at Ticket Hour.