I was working on this blog post in the late afternoon on August 17, 2011 when the phone rang. It was my mother telling me something was wrong with my dad. They were waiting for a bus to go to an outdoor concert in downtown Chicago’s Millenium Park. He had eaten a peach, got up and walked over to toss the pit in the trash, and returned to the bus shelter where he sat next to my mom. He smiled and said, “that was good”, and he died. Today as I have been working on updates to the blog, almost 2 months later, I am filled with a bittersweet mix of sadness and joy to discover that this was what I was working on the day he departed. He never got to read this post, but I know that somewhere up there he is smiling about it. (Dad spent alot of time with us both in Greece and elsewhere, and I know one of his favorite meals were the giant shrimp in Microlimano, scroll down to see him enjoying them).

There’s a joke in my family: The short version of it is that my father, relunctant to give his beloved daughter away to a man from outside of our tribe, decided to hold a contest for my hand. Being a lover of fresh fish, but never much one for cleaning and frying up the fish we (never) caught during my childhood camping days, he announced that the man who could best clean a fish would be given my hand in marriage. My mother was, of course, sure that only a nice Jewish boy who had either spent his youth with his grandmother making gefilte fish or had gone through a surgical specialty in med school would most certainly win the contest. That was, of course, before Basil (aka, my Greek God) invited them for dinner at Chicago’s finest Greek seafood restaurant, and proceeded to chase away the waiter as he approached, knife in hand, ready to clean and fillet our Red Snapper.
The rest is, of course, now history – but suffice it to say that my father beams with pride when we dine out with friends and fish is on the menu as he watches his son in law skillfully remove every last bone from even the tiniest fillets.
I, on the other hand, am still waiting for him to hook up the DVD player, cable box and the television.

Although most visitors to Greece will be lucky enough to have a waiter almost as skilled as my dear husband, some will venture to those off the beaten path places where it is assumed that the diner has some fish cleaning skill, and thus if you follow my blog you may just find yourself face to face with a whole fish …. waiting to under go your scalpel. (don’t worry, the fish you’ll be delivered has already been gutted, so you aren’t dealing with the gorey stuff, unless you find the head unbearable.)

1. Make an incision along the bottom of the fish (in fish talk, that’s the dorsal fin) – to the rest of us it is simply the bottom of the fish, front to back (or head to tail).
2. Remove the dorsal and pectoral fins (the top fin and the bottom fin to us non-fisherfolk – in case you still aren’t sure, it’s the spiny sticky things sticking off the top and bottom of the fish).
3. Next make an incision from top to bottom next to the head – your goal here is to seperate the top fillet from the head of the fish without cutting through the spine of the fish.
4. Now take a large spoon and gently flip the top fillet over, exposing the entire spine, which is still connected to the head.
5. At this point you’ll want to lift the spine, which along with the tail and the head if you’ve done this really well, onto another plate.
6. If you want to be like Basil, this is the point at which you can lift the hard skin above the gill and remove the cheeks. Yep, fish cheeks – appparently they are fantastic, but since I never clean my own fish, I’ve never been allowed to indulge in this delicacy. If you want to try them you’ll need to really suck up to your Greek waiter, or clean your own fish.
7. At this point the fish is filleted, and depending on the size and the number of people you’re serving you can cut up the fillets or just serve each fish to the person eating it. In Greece the fish is almost always served with a bowl or bottle of olive oil and lemon juice for pouring over your fish fillet.

Dad, I will always miss you, but I’m in good hands. 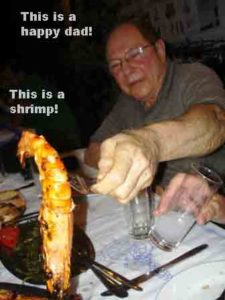