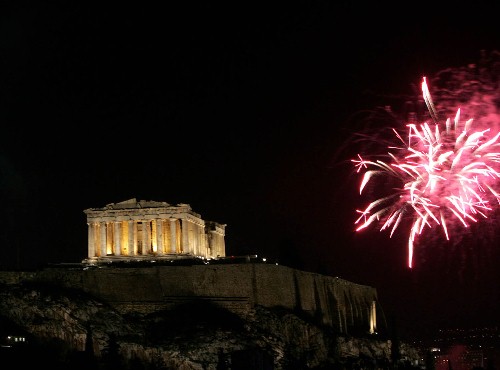 You’ve made your plans, booked your flights and accommodations, and now it’s time to plan your holiday break in Athens.  Turns out that most of the sites and museums will be closed on both Christmas and New Year’s Day, and in many cases the day after is also an official holiday.  There’s no replacing the experience of standing next to a giant temple or walking in the footsteps of the Ancients, but Athens is more than its sites, and sometimes an alternative view is the most special view of all. (You’ll come home with photos none of your friends have from their visits to Greece!) So, although the official doors may be locked, there are still plenty of sites to see around Athens:

Syntagma Square, still twinkling with the shimmering holiday lights, and this year decorated by Greek school children. Grab yourself a coffee from somewhere adjacent to the square and stroll through the Square up towards the Parliament Building. Across Vas. Amalias Avenue you’ll find the site of the changing of the guard. New Year’s Day is a Sunday this year, so aim to be there at 11 am to see the Ceremonial Changing of the Guard Parade.

The Evzones don’t get the day off, so you’ll still be able to view the changing of the guard here in from of the Tomb of the Unknown Soldier. Since you probably have nowhere special to be on time for, you can always follow them around lovely Vasilias Sophias street, to Herodou Attikou Street, which is around to the back side of the National Gardens, as they return to their barracks in the edge of the Gardens. Continue onward and on your right you’ll have a chance to see both the President’s and the Prime Minister’s residences. While they are the two grandest buildings on the “side” street, they are also the only ones with guards out front, it should be easy to spot them. I am always amazing when I walk home down this lovely street, with the gardens on one side and the Palace on the other – until the late 1800s this area was actually outside of the city limits of Athens. In fact, everything behind it, toward the Athens Hilton, was farmland and undeveloped except for a private Manor (on the site of today’s Byzantine Museum, and a monastery). It was, back then, considered to be “the country”. The Palace itself was built as the “new” Royal Palace (the “old” Royal Palace is today’s Parliament building) by King George I in honor of the marriage of his son, Crown Prince Konstantine, to Princess Sophia in the late 1890s. It was designed by German architect Ernst Ziller and is typical of his neo-classical designs in combining elements of Greek, Roman, and Renaissance architecture and while I doubt that President Karolos Papoulias will invite you in for a New Year’s day Open House (although who knows, his gardens are normally open to the public on Sundays), you can have a bit of a virtual tour here: .

Across the street is the The Maximos Mansion, the official residence of the Prime Minister. This mansion was built in 1924 as the home of Dimitrios Maximos, a prominent Greek economist and former Prime Minister (1947). It was designed by Anastasios Chelmis and is a typical one story Neo-classical urban palace with large, airy reception rooms and sitting areas, making it perfect for its first use by the Greek government for hosting official visitors. It did not become the official residence of the Prime Minister until 1982.

As you continue onward down Herodou Attikou Street, you’ll end up at Vasilios Konstantinos Street, facing Kallimarmaro, the old Olympic Stadium. The stadium has many names, but “Kallimarmaro”, which means “beautifully marbled” is my favorite as it is the only major stadium in the world built entirely of white marble (from nearby Mount Penteli). Cross the street to get a closer view of the stadium, and don’t feel like you are missing something because you can’t get inside for a lap or two. Even during normal business hours, the Stadium is gated and locked – visitors can only admire it from outside, but if you want a fabulous view few visitors ever see, you’ll have to take a bit of a detour around the backside. Incidentally these games were opened on April 6, 1896 and an estimated 80,000 spectators filled the Marble Stadium for opening ceremonies. Once you’ve taken your obligatory photo, walk back towards the  National Gardens, or towards the Zappeio building. There is a path from the corner of Vas. Konstantinos and Herodou Attikou Street, the left most path takes you to the Zappeio building, the right path takes you to the National Gardens. 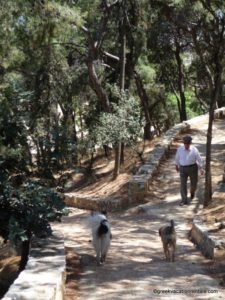 If you have made your way to Zappeio, there’s a chance for a little break at the café / restaurant next to this beautiful building, which also dates back to the first modern Olympic Games in 1896. It was used to host the fencing events, and has since been used by the government when Greece held the presidency of the European Union. It is often used for exhibitions and if it is open it is worth a visit to see the magnificent rotunda. (It also houses the best bathrooms between the Olympic Stadium and Syntagma Square!)

After your visit to the Zappeio, you can take the paved walk toward the fountain in front of the Zappeio toward the Temple of Olympian Zeus. While it may seem most dramatic stand close to this temple which was finally completed in 124-125 AD, you can get a nice view of it from the road that passes between it and the Zappeio garden area, as well as from the Hadrian’s Arch side if you continue walking toward Vas. Amalias.

If you are adventurous, instead of taking the beaten path to the Zappeion, consider going around the other side when you leave the Stadium, following the tram tracks along Ardittou street. You’ll pass the the Panathainikos swimming pools and cut off into the adjacent parking lot. Ahead you’ll enter a sparsely wooded path that leads to one of Athens little secrets: the Ilisos riverbed. Here, hidden away between the temple of Olympian Zeus and the lovely Ag. Irini church is one of the few spots you can still see the river, which once flowed in front of the ancient stadium that now lies beneath the modern Kalimarmaro Stadium. (After your stop along the river you can walk up toward the church and them walk to the right to get back to Vas. Amalias avenue and pick up the walking tour in front of Hadrian’s arch, but if you take the wrong path, don’t worry, you’ll just have to cross over a small fence next to the bridge).

Once you’ve reached Vas. Amalias, you can cross the street and take the pedestrian path that leads to the Makrigianni neighborhood, past the lovely neo-classicals which may not stand much longer if the New Acropolis Museum builders have their way. From here the path will wind you around the back side of the Acropolis, follow the signs that say Herodious Atticus Theater or Dora Stratou Dance. This path will also pass one of the paths up to Philopappou Hill. If you plan you walk to land you here just before sunset, you can take the path to the Philopappou monument and capture some lovely photos of the Acropolis and the theater. It is a walk many visitors miss, and provides are really breathtaking view. Be sure to bring a flashlight along since it will be dark when the sunsets and you’ll want something to help navigate the steps, which though they are not steep, are inconsistent in size and diameter, making walking them in the dark a bit tricky.

Coming back down to the street level, continue to your left into Thissio. Here you can choose from a number of places for dinner, or cross Ermou into Psirri where cafes and restaurants abound. Those Athenians who have finally crawled out of bed will begin to fill the streets of Psirri, and you’ll find plenty of options for both food and drink in this continually gentrifying area.