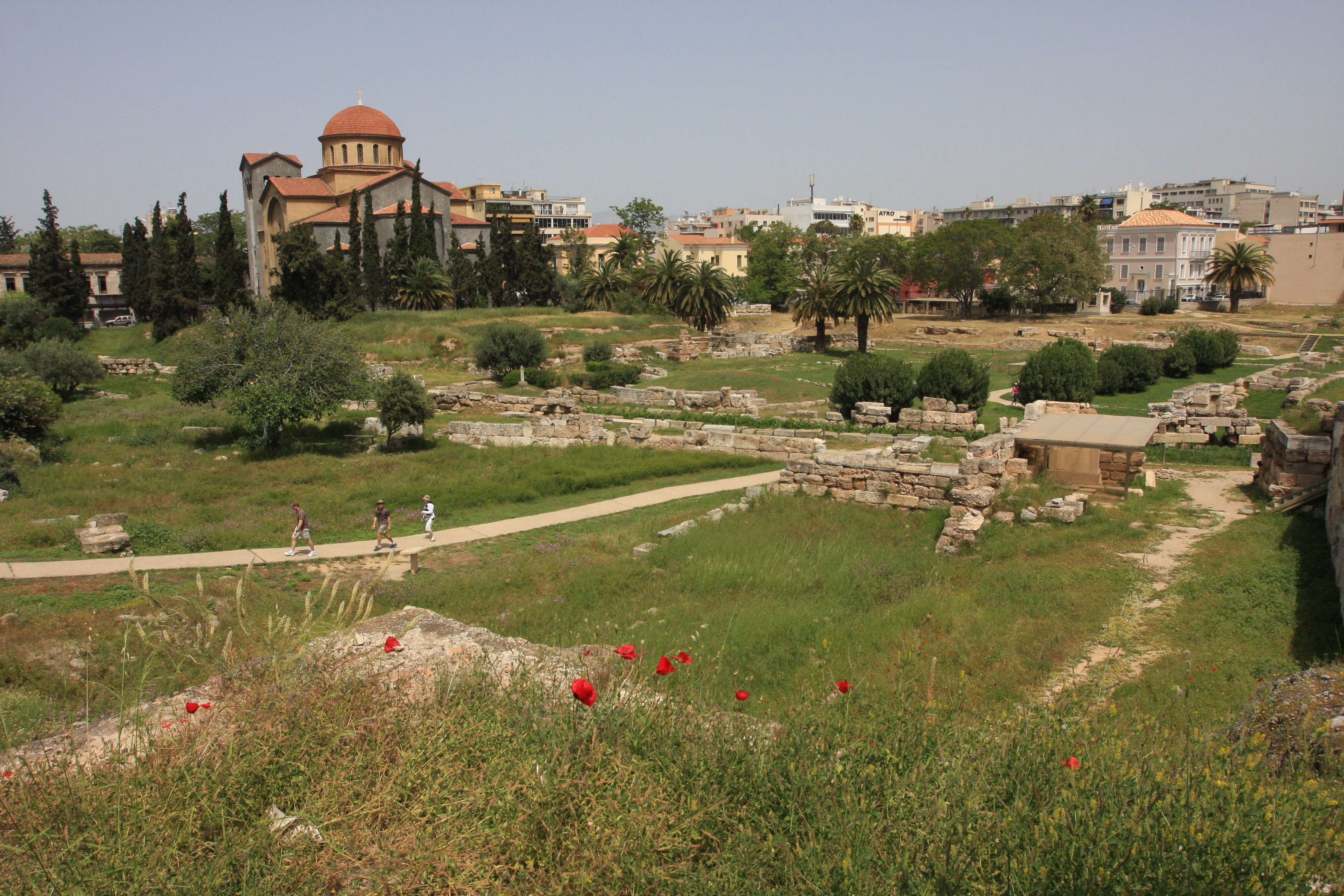 Athens has lots of popular walks, but most visitors would never consider taking a walk to Athens’ “most excellent suburb”, thinking, of course, it way to far to attempt on foot.  But to the surprise of most people who venture just outside the typical Plaka/Acropolis boundaries,  a peaceful escape and a beautiful meadow await, just a few minutes by foot from Monastiraki Square.

Technically, one could take a walk down Pireos street, that colorful street that ultimately connects Omonia Square, the heart of commercial Athens, with Pireas, the port of Athens. But that would require walking surrounded by traffic, honking horns and generally unpleasant urban chaos. A better route to the place the Ancients called the “kalliston proastion of Athens” or “Athens’ most excellent suburb” is to begin where Ermou ends. And thanks to the recent unification plan for all of Athens’ archaelogical sites, a pedestrian boardwalk provides the visitor with a quiet and sometimes even lonely route: the farthermost pedestrian part of Ermou street and somewhere in the middle of it, a few hundred feet before the city-wide scorned scavengers’ flea market, with it’s curvy pathways lined with second hand merchandise both carefully and non-chalantly displayed on second hand sheets and blankets spread out along the winding sidewalks that spur off from the main wide, walking path.  There, to your right, stands the gate to the ancient cemetery of Kerameikos: the place where eminent officials and soldiers still rest, where Athenians who “know their city” come for a stroll away from the noise of the city and the crowds of, what else, other Athenians.

Yes even the Athenians who come to stroll alongside this peaceful space don’t often realize that only part of this archaeological site is actually an ancient cemetery. Almost half of the land within the site’s walls was part of what the ancients called the “kalliston proastion” (most excellent suburb) of Athens. Here on land that was once just outside the City of Athens, is the only place where you can still catch a glimpse of the ancient stream Iridanos which, when the water flooded, became a nightmare for dwellers and a blessing for potters, creating natural clay along its banks, given forth its name, “Kerameikos”, the potters’ place.

This is where among the remains of walls and gates one can track the first few hundred feet of the ancient streets leading to Elefsina and the Academy of Plato, the tombs and staele of Athenians to be remembered, the Pompeion where the Panathenia processions would be prepared. All the activity in this tiny corner just outside Athens has not deterred more than a dozen animal species from thriving here since ancient times, turtles, toads, mosquito-fish and others that still call this ancient land home. A combination of human and natural works that has well merited its “cultural landscape” characterization by Unesco.

Most of the staele and statues that you can see at the cemetery are copies. The originals, together with other artefacts from the site are exhibited in the museum to the left after the main entrance. At the museum’s atrium you can admire the original life-size bull that you must have seen outside. In the other halls, do not miss the exceptionally expressive mourning statues and the image of the area as it used to be in ancient times.

The archaeological site is open from 8:30 am till 3 pm every day. Only on Mondays does the Museum open after 11 am.

Entry price is 2 Euro for adults, 1 Euro for people of 65 years and older as well as for non-EU students and free for EU students. Otherwise, this archaeological site is included in the 12 Euro multiple site ticket that you can purchase for the Acropolis. 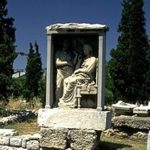 Take Line 1 of the Metro (Green line or what Athenians call “Eelektriko”, the the electric train, the first “metro” line that existed in Athens) to Thissio, turn left when you come to the street level, cross the bridge and left again onto the Ermou pedestrian walkway until you reach the entrance of the site to your right.