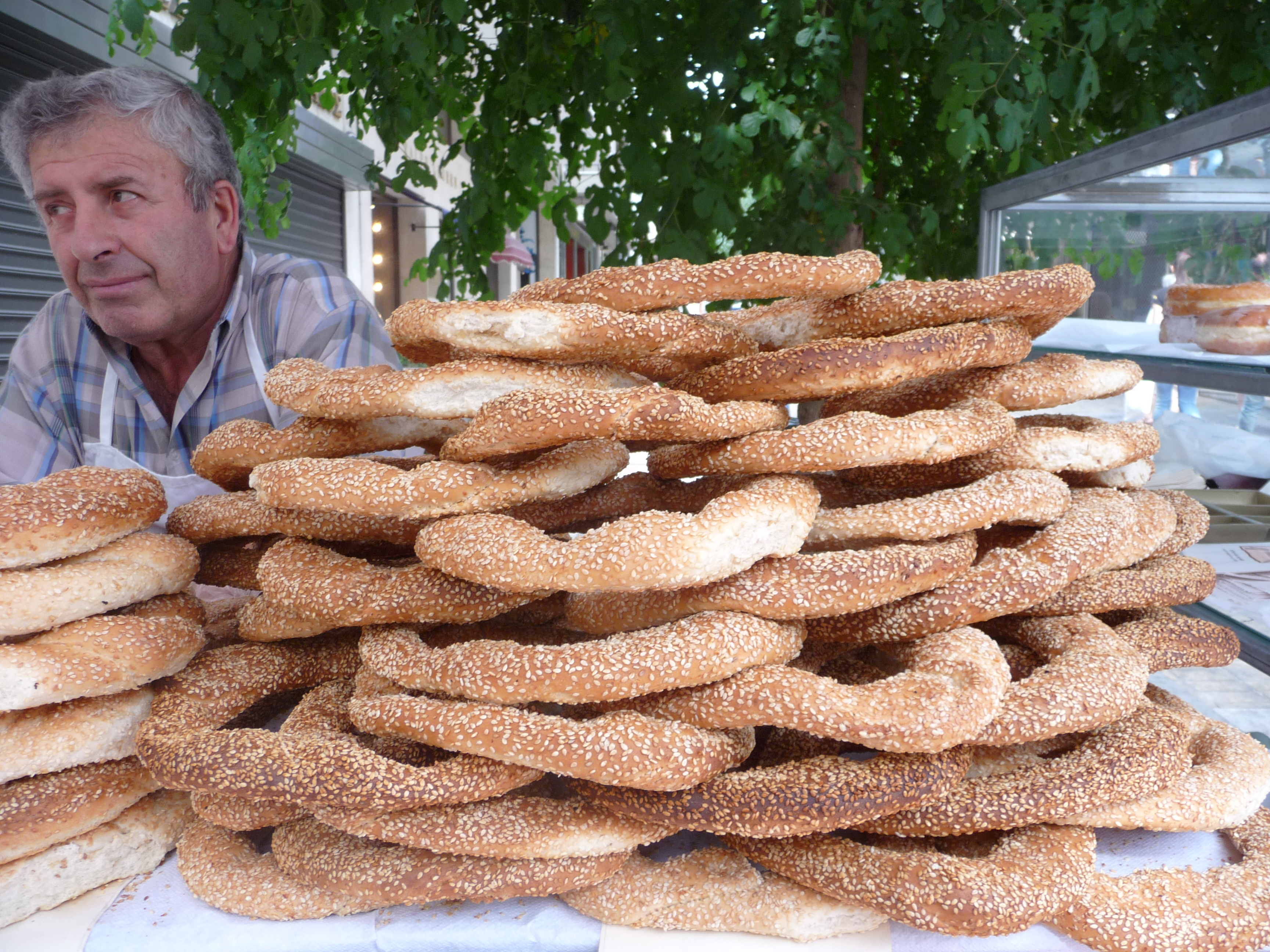 Koulouria, not bagels (the only bagel I’ve ever found in Athens was in the restaurant at the IKEA near the airport. Sadly they would not sell me a dozen, although one time I remembered to bring my own plastic bag and did actually walk up to the cash register with a plate stacked high with a baker’s dozen of them. The cashier looked at me a little strange, but being a wandering Jewess in Athens is hard work, and sometimes a gal needs a bagel.)
So back to koulouria, those large round things you see being sold on every corner around the center of Athens. You may even come across a vender carrying them around on a stick or piled high on a tray atop the vender’s head. In the morning you’ll see Athenians stopping to buy them, and by noon they used to be sold out, but in recent years I’ve noticed those sellers will be around all day (and yet, they are always hot and fresh, or so the seller sings out. Though they’re soft and fresh first thing in the morning, they are actually a good crunchy snack later in the day. You’ll find koulouria sold around the city of Athens. One of my favorite “koulouria stands” is on the corner of Panepistimio Street (AKA Eleftherios Venizelou Street (on the pedestrian street linking Syntagma with Kolonaki). Here you’ll find friendly Mr. Heracles serving up traditional koulouria, as well as koulouria kicked up a notch with feta, feta and tomato and ham and cheese.

A number of years ago, when Psirri was just starting to attract restaurants, we found ourselves wandering the streets of this still every-so-slowly gentrifying neighborhood late one night. In our younger days we may have been out enjoying the clubs, but by this time Basil and I explored to scope out the real estate market, and that’s exactly what we were doing that night after dinner. Explore we did, and before we knew it it was well after midnight. Our buddy / tour guide Yorgos finally put a stop to our searching, announcing it was koulouria time. He led us back through the tiny, dark somewhat grimy streets until we found ourselves standing in front of a narrow storefront. A couple of old men with carts stood around, smoking and chatting. One had an old bicycle with a cart attached to the front. Yorgos pushed us through a small crowd of Athenian clubgoers who were blocking the door, munching on oversized donuts, until we were inside, where it was warm and the smell of fresh baked bread was intoxicating. On one side stood a bakery rack, stacked high with trays of the infamous koulouria. An older man took orders, wrapped the breads and accepted payment. At that time there were two choices, koulouria, the bagel like roundd breadstick, and loukouma, a large, light puffy donut sprinkled with sugar (not the powdered kind). The plural is loukoumades, but not to be confused with the Dunkin Muchin looking pastries dripping in cinamon and honey, that’s another story.
Yorgos insisted we have one of each, which, after extensive arguing, we agreed to. Although I think of myself as much more a bread and pasta person and I’m not actually a big “sweet” eater, I can still smell and taste that warm from the oven loukouma.
It’s been years since that night, and every time I’m in Psirri I wonder where it was we were. I’d assumed the source of central Athens koulouria had long since been displaced – chased away as the area slowly becomes the “high rent” district – but recently, wandering around the neighborhood one Sunday morning we bumped into the bakery. It’s still there, the ovens still burning, the koulouria and loukoumades still filling the street vendor’s carts.
The bakery seemed to have a fresh coat of paint, and a young woman taking orders, and ringing them up on a real cash register, even issuing official receipts.
We couldn’t pass by without picking up a few, and they were as soft and chewy as I remember.

I did notice signs that even this old fashioned bakery is moving up along with the neighborhood. The recently renovated storefront next door appears to being prepared for a new bakery tenant. It’s either our old koulouria bakery going trendy, or some smart entrepeurner is on to the fact that they don’t sell coffee along with the donuts – guess I’ll have to check on that next month when I’m back in Athens.

5 thoughts on “Is that a Greek bagel?”