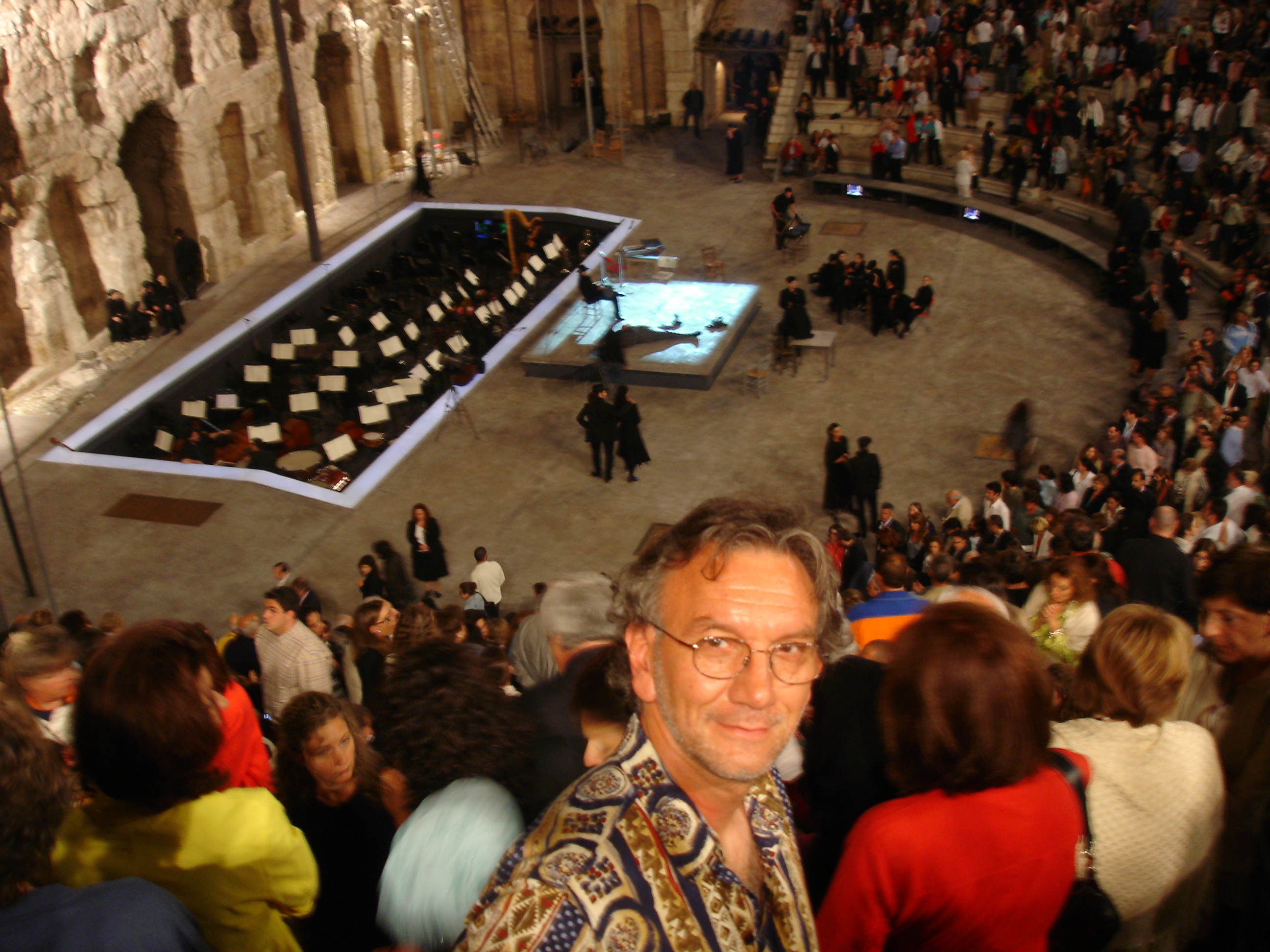 The Athens Festival 2012 program has been announced, and this year the lineup includes 4 performances of Verdi’s Il Trovatore at the Herod Atticus Theater (the Herodeon) under the stars, the moon & the Parthenon.

There’s nothing, I mean, nothing, quite like a concert in this amazing ancient theater.  If you are lucky enough to be in Athens on the eve of a performance, I strongly suggest you go – it will be a highlight of your time in Greece.

Other Athens Festival Venues for 2012

Little Epidaurus is going to be a youthful affair this year. Dimitris Bitos takes on Sophocles’
Antigone with a cast which—including Psarantonis, the master of the Cretan lyre—promises surprises.
Following last year’s performance on the roof of Greek National Railway headquarters,
Anestis Azas and Prodromos Tsinikoris return with a spectacle based on the institution of the
Epidaurus festival and Epidaurus itself.

Theatrical performances during the Athens Festival

The Berliner Ensemble is bringing two much talked-about productions to this year’s Athens Festival:
Claus Peymann, the company’s director since 1999, remains true to his ‘love affair’ with
Thomas Bernhard and directs Gert Voss in Simply complicated (Einfach Kompliziert), the monologue
the Austrian playwright dedicated to the stage legend, Minetti. A reclusive elderly actor
bitterly recalls the past and the time he was performing Richard III, a role he thought himself
fated to play. Collaborating once again with Brecht’s theatre, Bob Wilson persuaded Rufus Wainwright
to write his first music for the theatre and staged 24 of Shakespeare’s 154 love sonnets
in an extremely stylized, surrealistic, oneiric production in which genders blend and the bard is
played by the 86 year-old grande dame of the German theatre, Inge Keller.

A celebrated choreographer, Mats Ek undertook to direct Stockholm’s Royal Dramatic Theatre in
Strindberg’s The Ghost Sonata in the centenary of the playwright’s death. Strindberg’s most misunderstood
and paradoxical work, it is thus also the closest to the theatrical quests of our own
era.

British theatre is represented at the Festival by the energy, daring and imagination of 35 yearold
Edward—son of the great Peter—Hall. The iconoclastic Henry V he staged with the all-male
Shakespearean Propeller company has already proved an international hit.
Rodrigo García
The 48 year-old playwright’s controversial Golgota Picnic required police protection when extreme
right-wing demonstrators and religious organizations reacted against its staging in France.
The Argentinean writer who lives in Madrid and uses his trash aesthetic to attack the sort of
Catholic education that instils a fear of hell in children is already a familiar face at the Athens
Festival.
This year’s Athens Festival will feature both distinguished and up-and-coming Greek directors.
Following on from the success of I die as a country at the Athens Festival (Peiraios 260) and
abroad, Michael Marmarinos returns with another text by Dimitris Dimitriadis, Insenso, which
was inspired by Luchino Visconti’s Senso. “I am Countess Livia Serpieri. I handed my lover, Sergeant
Franz Mahler, to the Austrian army for desertion…”. The interior monologue on the subject
of double betrayal is performed by leading Greek actresses with an Italian colleague among
them.
The innovative Dimitris Lignadis directs Miss Julie with Stefania Goulioti in the mythic title role.
The director plays Jean. We can look forward to a new approach to the carnivorous Strindbergian
relationship which is the Athens Festival’s contribution to the August Strindberg Centennial.

Two important actors join forces with a young director in Ionesco’s The Chairs: Olia Lazaridou
and Dimitris Kataleifos interpret this classic play of the absurd, directed by Euripides Laskaridis.
Athanasios Diakos: the return. Lena Kitsopoulou, the actress who recently made a splash with
her personal authorial style, performs and directs her latest play. Her core collaborator in this
venture, the actor Nikos Karathanos.

The Blitz Company, whose recent appearance in Berlin garnered considerable acclaim, has promised
a surprise performance.

Simos Kakalas and the Choros theatre company present Erofili (no. 3), a production dedicated
to injecting new life into our relationship with tradition.
Dimitris Kourtakis returns with Amok (Orestes), a work which tackles the burning issue of adolescent
criminality by bringing together the violence that possesses the Atreides as they run
amok in Euripides’ Orestes and that of the two teenage assassins at Columbine High School.
Giannis Kalavrianos returns with Sons and daughters, a performance on the quest for happiness,
a work based on interviews with the elderly.
Woyzeck, Büchner best-known work, brings German and Greek artists together in a fascinating
experiment. Directed by Elli Papakonstantinou. With Argyris Xafis.
Another two young directors whose early work has shown considerable promise have been invited
to collaborate with the Athens Festival for the first time:
Dimitris Karatzas will be directing his youthful company in Ibsen’s Little Eyolf.
Sylvia Liouliou is presenting Dionysios Solomos’ Lambros.
Nikos Diamantis’ Simeio Theatre will be presenting its installation, Museum of Human Behaviour,
at the Benaki Museum.

Opera in the Athens Festival

Turning to opera, the most expensive of all staged spectacles, two productions, both of them
interesting, though for different reasons, have already been confirmed:
The Greek National Opera will be kicking off proceedings at the Odeon of Herodes Atticus with
Verdi’s ever-popular Il Trovatore [The Troubadour], a work which last featured in the Athens Festival
programme exactly thirty years ago.
Following on from the success in 2011 of The daughter of the storm, the Athens Festival will be
staging another operetta by Theophrastos Sakellaridis, the popular The Godson, this year. Giorgos
Petrou will be conducting the Camerata.
Kharálambos Goyós returns with his already celebrated Yasou Aida. The successful Neuköllner
Oper / Thessaloniki Concert Hall co-production was part-funded by the Hellenic Ministry of Culture
and Tourism and premiered in Berlin on January 21, 2012 to rapturous reviews in the German
Press. A reworking of Verdi’s Aida into a political parable for our times, the work mercilessly satirizes
the current state of play between Greece, Germany and the EU.
Markellos Chrysikopoulos and the Venice Baroque Orchestra will be stopping off in Athens as
part of their European tour to tell the tale of Olympia as penned by Metastasio and set to music
by six different composers. L’Olimpiade is a tale of forbidden love set against the backdrop of
ancient Greece and the Olympic Games.
Orchestras
The state orchestras of Athens and Thessaloniki will be playing an especially important role in
the Festival this year. The Athens State Orchestra will be giving two concerts conducted by the
ensemble’s artistic director, Vassilis Christopoulos. The Thessaloniki State Orchestra will be
performing one concert.
The Russian ensemble Musica Aeterna will be performing an all-Russian programme under the
baton of Theodoros Kourentzis, as well as accompanying the Perm Opera and Ballet Theatre
live in two celebrated and musically demanding ballets by Stravinsky: Les Noces (choreographed
by Jiří Kylián) and Petrushka.

Dance performances during the Athens Festival

Sasha Waltz – Continu
The celebrated Berlin choreographer who first thrilled Festival audiences with Körper, part of
her trilogy on the human body, in 2006, returns with a choreography which negotiates the contrast
between primal, instinctive emotion and the spirituality by relating the individual to the
group, and assigns an important role to the music of Edgard Varèse and Ioannis Xenakis.
Alain Buffard – Tout va bien
The 2008 Festival saw Alain Buffard participating both as a choreographer in (Not) a Love Song
and as a performer in the revival (2009) of Anna Halprin’s Parades & Changes. Making no concessions
in terms of the work’s dominant aesthetic and high principles, Buffard undermines the
codes once again and issues a clarion call to disobedience. His chief concern is emancipation
and reacting to various forms of repression.
Ali Thabet, Hèdi Thabet – Rayahzone
The Thabet brothers from Tunisia—artists with roots in dance, the circus and theatre—have jointly
conceived and choreographed a unique journey (‘rayah’ means ‘journey’), an immersion in Sufi
music in which the lead roles are played by bodies, the human voice and the rhythm of percussion
driving movements that can be either fluid or violent.
Julie Nioche – Nos solitudes
At a crossroads as a choreographer, Julie Nioche introduces herself to Festival audiences with
Nos solitudes, in which she is suspended above the stage by a mechanism. But her gravity-defying
journey presupposes neither magic nor spectacle: what you see is a body in search of balance,
like a child learning to walk.
Mariinsky Theatre Ballet – Don Quixote
Don Quixote is, with Swan Lake, one of the two most popular Russian ballets. Based on Cervantes’
novel, the ballet was first staged in 1869 to music by Leon Minkus and choreographed
by Marius Petipa. A comeback of The Mariinsky Theatre ballet to the Odeon of Herodes Atticus,
since 2009.