It may sound like Delphi, but its not. In fact if you aren’t keen on a 2.5 – 3 hour drive (each way) to reach the site where the famous Oracle of Delphi held court, perhaps you’ll be intrigued to know that just 37 km from Athens another Oracle delivered prophecies once thought to be as accurate as the more famous one 150 km away. 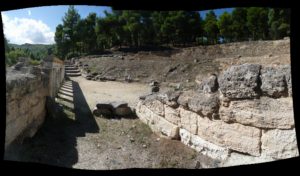 Anyone who watched the news over the course of 2010 knows that it was a tough year for Greece. And for those of us who have dedicated ourselves to helping visitors explore this amazing country, the constant onslaught of exaggerated media coverage left Basil and I wishing we had a modern day oracle to predict the outcome of this latest drama unfolding around Greece’s future. It was finally time to pay a visit to the Amphiareion of Oropos.

Amphiaraos, whom the site is dedicated to, was, after all, a decendent of a 5th century BCE seer. His own clarity was said to be so good that he refused to participate in an attack on Thebes because he predicted it would end in disaster. As we wound up and down the hills and past deep gorges en route to the site, the legend that the earth opened and swallowed Amphiaraos’ chariot following the aforementioned battle seemed plausible (well, the ancients didn’t have seismographs, how else could they explain such phenomona?)

Ancient pilgrims to the sanctuary would bring something to the temple to sacrifice – usually a ram, although some inscriptions at the site indicate that the visitor could choose what they wanted to sacrifice. Unable to find a ram in Athens or en route, we opted for a crusty loaf of bread, some Naxos Graviera, some thinly sliced pastourma, a bag of grapes and a quintessentially Greek water bottle filled with our own Scruffy blend of penthouse red wine (We discovered long ago that it is not the bottle that makes the wine! So if we meet and give you a plastic jug of wine, don’t dismiss it. We have drank much wine before we chose this as a present).  Pastourma, the oh so smelly dried and cured meat that’s been slathered with garlic and other spices, predomanently fenugreek, to which it owes it strong odor, isn’t permitted in my house (the odor remains long after the meat has been consumed) but on picnics its permitted, so this was the perfect opportunity to offer Basil one of his favorites.

More recent visitors to the site, (well, 120 or so years ago), as detailed in John Murray’s 1884 Handbook for travelers in Greece would have made Oropos part of a 3 day excursion from Athens – heading first to Marathon (1 full day) then traveling north to Rhamnous (1 day) and then west to Oropos via Grammatiko (1 full day).  Lucky for us the moderns decided to build a highway north to northern Greece, Ethniki Odos, which we use to our advantage and turn the full day journey into an hours or so drive. 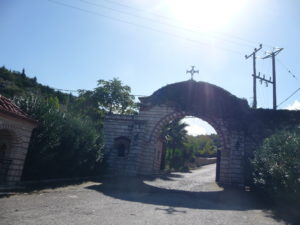 To reach the site, we headed north on Ethniki Odos towards Lamia and Thessaloniki, until Athens’ citiscape merges into the northern suburbs and the landscape turns to plant filled garden centers designed to lure weekender and daytripping Athenians in to fill their cars with plants to furnish their urban balconies and verandas …  The road heads north then east and west and north and west then east again. The site is oddly set in between the hairpin turns of the Skala Oropos road, which winds through the villages of northeastern Attica, through pastures and farms, through olive groves and past the Theotokou Monastery (other worldly welcoming in the shimmering late autumn sun the day we passed by).  The entrance itself sits barely noticeable, and the too fast driver might miss it entirely, although I think we did see one brown “archeological site” warning us to keep watch for it as we approached.  Since there isn’t a real parking lot and there were certainly no other tourists the day we visited it’s actually easy to imagine missing the site entirely.

The Amphiareion of Oropos was a sanctuary and healing center dedicated some time in the 5th century BCE – you can pick up a copy of a book about the site when you arrive there, or you can google it and get a bit of history about it from Wikipedia.  I’ll just share my favorite description from Pausanias of the goings on at the sacred spring, located across on the far bank of the now barely visible stream:  Remember that ram I mentioned earlier? The one the ancients would bring to sacrafice at the temple of Amphiaraos? He was really a multi-purpose ram, so his sacrifice wasn’t merely for the sake of the sacrifice, but the visitor coming to consult with the oracle also needed to cleanse themselves to be as pure as possible for their dream interpretation. The sacred stream and baths served the purification process;  the advice seeker would wrap himself in the ram skin which doubled as the cocoon to produce the dreams for the oracle to interpret.

Alongside the sacred spring there’s also the remains of an ancient water clock, a clepsydra.  It’s the first time 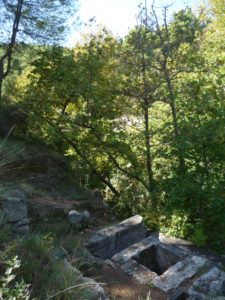 I’ve seen one so well preserved, though I confess I don’t really understand how they worked (ask Basil if you really want an explanation, though be prepared for the engineer’s report on Clepsydra). A bit above the water clock we found a somewhat smooth area with a couple of large boulders suitable for our santuary picnic.  The late autumn day we visited was actually quite sunny and warm so the shaded area offered us a nice bit of coolness as we relaxed in the quiet over lunch, contemplating the possible queries brough forth by the ancients who traveled here more almost 2500 years ago.

Back on the entrance side of the site there are the remains of an ancient theater. It isn’t large so don’t imagine Epidaurus, but it does contain several rather well preserved marble seats, each inscribed with the names of various benefactors. Nearby the road to the between the temple and the sanctuary was once lined with statues, today only their bases remain to tell tale of various Roman era dedications, bearing witness to the temple and sanctuary’s importance as late as the 1st C BCE. 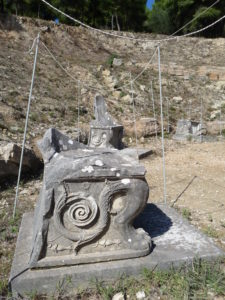 The Amphiareion of Oropos is about 37 km from Athens and is open daily from 8:30 AM until 3:00 PM. Admission was still 2 euro when we visited in October 2010, but since times and prices are always subject to change in Greece, I recommend a phone call to the site before you rent a car or hire a driver for the trip (yes, you need 4 wheels – busing it is not recommended).  The number for the ticket office is +30 22950 62144.
Amphiarion Photo Gallery
Not enough time to venture this far off the beaten path?  AthensLiving has done the work for you and brings you this video about the Amphaireio of Oropos.

1 thought on “Athens Daytrips: A scared spring & an oracle”