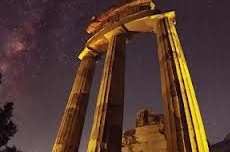 Eugenides Planetarium’s latest digital show invites you on a voyage through space and time to uncover the ideas and the knowledge that the ancient civilizations had for the heavens. “Ancient skies“ consists of four parts, the first of which focuses on what can be learned about the “Sky of ancient Egypt”, by studying its monuments.
The show runs until January 6, 2013, so if you’re traveling to Athens over the holidays, add the Planetarium to your “to do” list –
The Eugenides Planetarium is located at 387 Sygrou Avenue in P. Faliro about 15 minutes from Syntagma Square.
You can catch any of the following buses at the Syngrou Fix metro station:

By public transport: the following buses serve the Foundation: