The «Athens World Music Festival», organized for the second consecutive year, from 15 to 19 July 2013, the City of Athens Technopolis. Under the special theme titled “PIIGS” artists from 5 European countries, Portugal, Italy, Ireland, Greece, Spain-branded as the last year for budgetary debt, show the great musical wealth of their countries.

The “PIIGS” will have the opportunity to show how culture and music is an important pillar of both European and world music and cultural tradition.

The Andre Maia Band adapts and plays Fados and music from Portugal. The Fado is the expression of the Portuguese soul. The sense of mystery and melancholy of this music was born in Lisbon (Portugal), are the elements that ensure Fado in a prominent position on the so-called “World Music”.

The anxiety and the search for new roads can be seen from the beginning of her career. It was evident in Ulisses [Ulysses], on Abril [April], on Não há só tangos em Paris [There’s More to Paris than Tangos], again at Alegria [Joy]. The Cristina Branco describes this continuous search as “the adrenaline rush of being alive.”

The Alegria is not an album about hope, but does not deny that there may be hope.

The encardia, the peculiar and completely attractive this music collective, is at this time one of the most visible and prestigious in the country and internationally Greek forms of world music. Devoted to the rich traditional and energetic music of Southern Italy, with the convincing their expression and performance of music, our music traveling in remote villages of Calabria, in the beautiful Salento region and in all those places that still speak Gkrekanika and other local dialects. Main characteristic of the shape the relationship you develop with the respective public of their concerts. The group was founded in 2004 to describe a enviable story so far that includes nearly 500 live performances throughout Greece, but also France, Germany, Algeria, Switzerland, Cyprus, but mainly in Italy itself and five highly successful albums.

In March 2012, the film Angel Kovotsos (production G. Poulidis) entitled encardia «Stone dancing” and on the trek the group in the areas of Greek-speaking villages of Italy, won the audience award at the 14th Thessaloniki Documentary Festival and displayed foreign festival and in theaters across Greece since November 2012!

The “Nuova Compagnia di Canto Popolare” was created in 1970 to promote the traditions of the region of Campania (region in southern Italy with its capital Naples). The phenomenal success of the Spoleto Festival in 1972 and 1974 was the start of their international career. Since then, the “Nuova Compagnia di Canto Popolare” have participated in the most important music festivals in Europe and beyond, as in Edinburgh, Helsinki, Berlin (Festwochen), the Théatre des Nations (Caracas 1977, Hamburg 1979), Buenos Aires ( Coliseum), the Festival of the Fiandres, Zurich, Strasbourg (Mozarteum), Paris (Théatre de la Ville), Athens, Israel, Spoleto (USA), Sydney (Opera House), Hong Kong, Singapore, the Schwetzingen Festspiele (1990) , Tokyo (Sogetsu Hall), Cologne (Opera), Sao Paulo (Sesc Pompeia 2001), Sofia (Sala Bulgaria 2001), Belgrade (Kolarca 2002), London (Riverside Studios) Munich (Herculees Saal) and many others.

2013 have already appeared in various shows around the world, as ksi in two performances at the International Music Festival in Cartagena, Colombia, where they played in front of 3,000 people and the show was broadcast live on television. Their program includes tours of all major cities in Luxembourg, Germany and Italy.

The Réalta have a lively, enthusiastic and respectful approach to traditional Irladiki music. Raised on the music of The Bothy Band, Planxty and other such classic shapes, this complex from Belfast manages to capture the time value of traditional music and infuse this data from other music venues.

In live performances, the Réalta enchants the audience with enthusiasm, energy and passion of their music.

Their first album titled ‘Open The Door For Three’ was released in September 2012.

The traditional folk band Altan is one of the protagonists of the revival of Irish music at home and abroad. Famous for dynamic double violins and timeless a cappella performances of old Celtic songs, the sounds Altan specialize in the dynamic style of the area of ​​Donegal, which stands for kilts musical influences bearing.

Her father Mairead, o Francie Mooney, was a leading figure in the preservation and promotion of music violin Donegal, which Altan made popular around the world. The traditional sounds of Donegal have a distinct Scottish connotations, mainly because of its long exchange of workers migrating between Scotland and Donegal and the inevitable involvement of local musicians. The quick, odd, sharp routes bow and triple staccato characterizing violinists of Donegal are the heart of the dynamic sound of both ionizing playing the Mairead Ni Mhaonaigh and Ciaran Tourish. This basic sound of Altan flanked by his accordion Dermont Byrne and dynamic sound of percussion played by Ciaran Curran, and Daithi Sproule.

Christy Stasinopoulou is singer-songwriter songwriter for many years pursue its own, independent course in Greek music and song. Stathis is a composer, arranger, multi-instrumentalist. Together they have released 5 albums that stood abroad. Since then, along with their band traveling and playing in international music festivals and venues in Europe, America, Canada, Brazil, etc. In most of these very important festival is the only Greek representative of our country, the music and our language.

In June 2012, the company engleziki Riverboat Records of World Music Network released the fifth album of Kristi Stasinopoulou and Stathis Kalyvioti, entitled Greekadelia, this time includes remixes Greek folk songs from various regions of Greece. For two months in a row in August and September, Greekadelia is at number one of the World Music Charts Europe. Has gotten rave reviews from newspapers such as the Guardian, the Independent, the Financial Times, the magazine Folk Roots, magazine Songlines etc.

Christie & Stathis playing songs from their latest album Greekadelia, including electronic-acoustic covers of traditional songs and their own songs from their previous album, Yfantokosmos, Ichotropia, The Secrets of the Rocks and Taxidoskopio.

One of the most expressive representatives of rebetika and folk song, Mary, was born in the Russian Thessaloniki.The mother of the Farasa Cappadocia (central village was a large region of Southeast Cappadocia stretched over the mountain ranges and highlands of the Taurus and Anti-Taurus) arrived refugee in Greece in 1923 and settled in Plati Imathia. Her father hails from Korino Katerini.

Mary “baptized” in the music of the 13’s singing and playing the accordion next to her father, who was also a musician. Since then serve with exemplary consistency and passion singing next to the most important performers of rebetika and folk song. He has toured in most Greek cities, in many European countries and the USA. Touching and deeply human Maria is considered the last authentic representatives of a style that draws on the human experience and avoids spurious imitations and innovations.

First came on stage singing and Derveniotis Virvou. He was fortunate to sing next to Marcus Vamvakari 1967. For many years appeared to Thessaloniki with the Chondronako and Christos MiGs.

In 2009 released the cd «Mario – 50 Years path”, a live album that contains some of the most iconic songs of rebetiko as the course of Marios.

Among other contained the best rembetika of Thessaloniki (“The green mill”, “The bloke stands”, “third Thursday spaghetti” etc.), great rembetika Vassilis Tsitsani (“Like outcast,” “Tonight on beaches” ) and songs-suggestions such as “God Almighty.”

The word Xarnege, or Sharnègo comes from gaskoniki dialect and refers to the villages located on the border between the French province of Gascony and the Basque country and where the inhabitants speak Basque and Gascony. The band of Xarnege combines many elements common to both cultures.

The traditional music from both sides of the western Pyrenees, and from Bearn, Navarra and the Basque Country is the repertoire of songs, dances and sounds of Xarnege. The Gascony and the Basque Country, besides being geographically close, share many cultural elements and music is one of them.

Traditional dances branles, gavottes, jauzis, segidas, polkas, rondeus, mutchikoak and waltz and the music that accompanies them interpreted, therefore, uniquely personal way, to form a joint expression of two peoples with different modes of communication, and whose relationship between them is not known to the general public.Versions of the same song interpreted differently by different instruments, in different languages ​​and having different dance steps, but the spirit remains the same.

The Lenacay show the RYMA, their first album and the start of this adventure. A disc is a musical journey without limits from the roots of flamenco in uncharted horizons.

This exercise is a musical experiment that moves between flamenco and different forms of musical expression, and also some experimental electronic content. Send a groundbreaking call for an unforgettable journey of the senses.The name of this extraordinary shape comes from the joining of two words in Romany, ie dialect of Spanish gypsies:

The combination of two words creates a broader sense it represents the most musical and physical aspects of life: A LOOK AT STATE OF LIFE 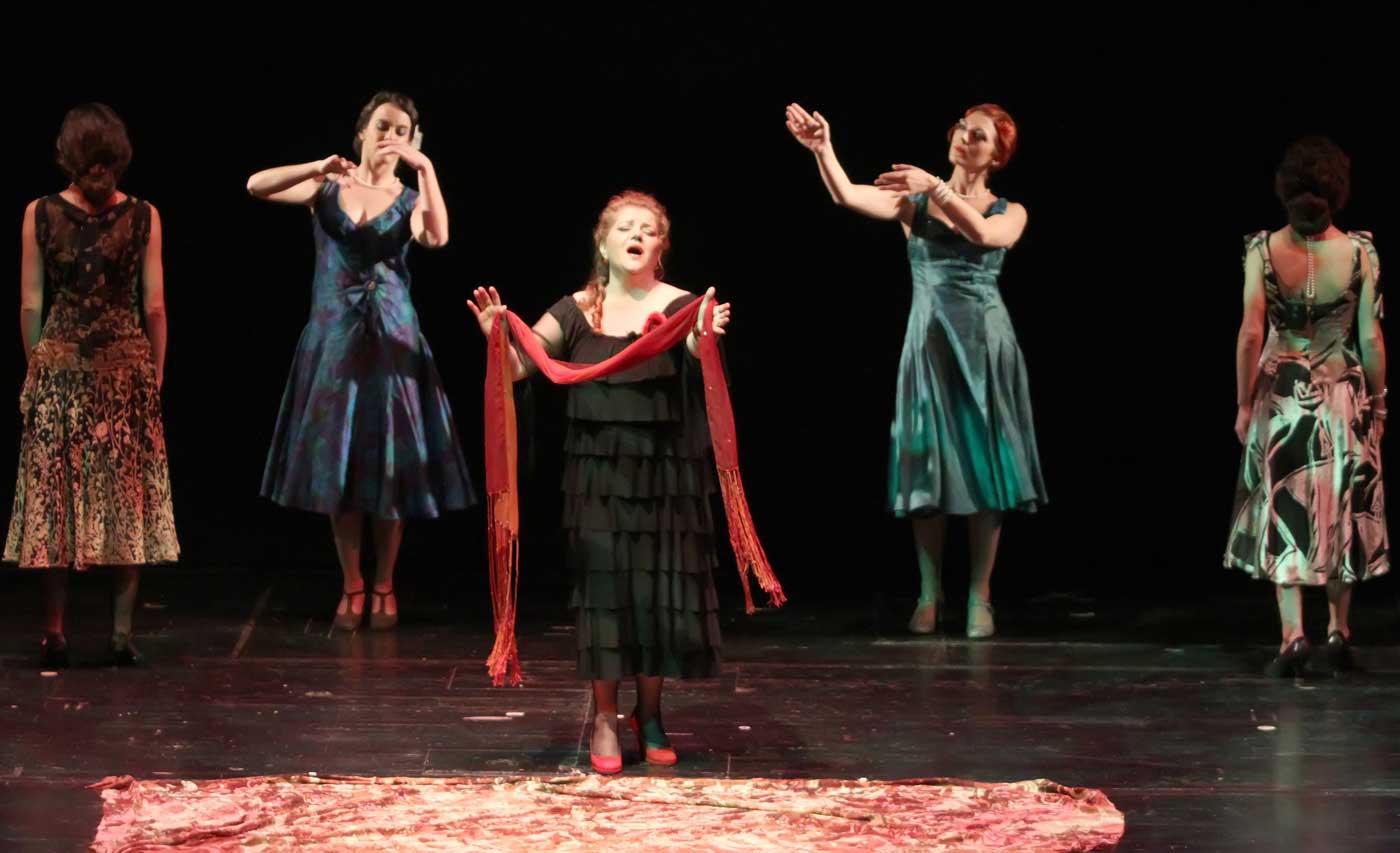 Ever wonder about those late night Blues clubs?